How to Develop a World Championship Construction Team, Part 3

Editor’s Note: This is the third in a 3-part series titled “How to Develop a World Championship Team,” that employs Oakland A’s general manager Billy Beane’s strategy of using qualitative metrics to find good talent. Link to part 1 and 2 here.

Superintendents and foremen serve as the front line of any construction firm—the responsibility of winning the game of construction ultimately falls on their shoulders. They can be compared to the cleanup hitters in baseball. The success of a construction business is based on how well these “players” understand and implement the game plan.

Just as business owners need to measure their project managers’ adherence to preconstruction planning, they must also measure their superintendents’ and foremen’s compliance with short interval planning and daily planning.

Billy Beane expected his players to play to the Athletics’ standards. And construction business owners should have the same expectations—every player must be held accountable to maintain the firm’s standard operating procedures.

Use Earned Value as the Efficiency Rating

Earned value can provide construction business owners with one of the greatest individual construction project performance metrics. It compares estimated units/put-in-place units for a particular phase of work with estimated hours on that work. This equation determines overall efficiency by comparing the number of earned hours to the actual hours spent. See Table 1.

In this example, the chilled water piping is 30 percent complete (300 LF of the 1,000 LF estimated). However, this firm has spent 50 percent of its labor hours resulting in an efficiency rate of 60 percent. Comparatively, the 6-inch sanitary sewer installation operates at a 143 percent efficiency rate. These calculations rely on the following data:

Profitability may indicate a project’s overall success or failure, but a superintendent or foreman should be measured by their ability to control direct project costs to enhance the final margin. 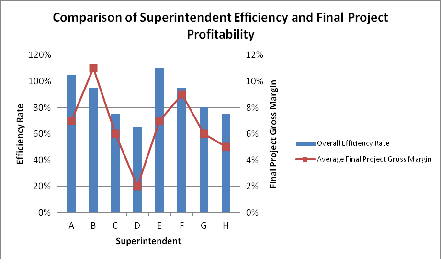 On the surface, Superintendent B exhibits the highest final gross profit margin. But this may be the result of other factors outside of his or her control. On the other hand, Superintendent A has the highest efficiency rate but falls within the firm-wide average on final margin.

As a potential scenario, it may be likely that Superintendent A has more challenging projects, and if Superintendent D had these projects, he or she might fail. Examining final profitability may not show the true source of the firm’s most productive “hitters.”

Punch lists or deficiency lists provide another indicator of a superintendent’s performance. In addition to the costs associated with construction errors, unfinished items and unacceptable quality, the intangible erosion on the customer relationship should be considered. A distinct correlation exists between how a project finishes and its margin gain or erosion.

Figure 2 shows a summary of a firm’s completed projects and the punch lists generated. The chart shows the corresponding margin gain and erosion plotted on a secondary axis.

Just as coaches monitor pitch counts as a predictive index for their pitchers’ performance, metrics such as the superintendent strike zone provide a target and visual depiction of completion standards. This firm’s superintendent can complete 60 to 70 punch list items.

Business developers, estimators and managers may spend the necessary time planning a project, but they might not dedicate enough time preparing  construction field managers. Without proper planning, a great superintendent can easily resemble a weak superintendent.

This would be similar to coaches and managers developing a game plan but failing to share it with the starting pitcher. The consequences of poor planning usually show up at the most inopportune time often at the end of a project.

If profitability declines, the field manager wears the brand of weak leadership. Consider the 1986 World Series. Former Major League baseball player Bill Buckner’s infamous error became the most recognizable mistake in the sports world, and many believed this cost the Boston Red Sox the crown. But this was not the final game of the World Series. This was a seven-game series, which meant the Red Sox had ample opportunities to win.

Superintendents on poorly planned projects often become the Bill Buckner scapegoats for errors that happen in the first inning.

Metrics permeate the construction industry. Since leaders are inundated with numbers, they can become numb and fail to recognize patterns and true performance indicators.

Now more than ever, building a profitable construction business requires executives to think like Billy Beane. Measure the right KPIs, make the right decisions, and keep your eye on the ball.

Gregg M. Schoppman is a consultant with FMI, management consultants and investment bankers for the construction industry. Schoppman specializes in the areas of productivity and project management. He also leads FMI’s project management consulting practice. Prior to joining FMI, Schoppman served as a senior project manager for a general contracting firm in central Florida. He has completed complex construction projects in the medical, pharmaceutical, office, heavy civil, industrial, manufacturing and multi-family markets. Furthermore, Schoppman has expertise in numerous contract delivery methods as well as knowledge of many geographical markets.  For more information, visit www.fminet.com.&nbsp;

Management
How to Make Your Business Work Without You
Why you may be your company's main problem & how to fix it
Management
What Makes a Strong Project Manager
Defining the core competencies necessary to ensuring professional success & longevity
Management
6 Tips to Improve the Interview & Hire the Right Candidate
How to keep a first impression—good or bad—from driving a business decision you'll regret
Management
Project Management 101: A Modern Primer for New Leadership
How to lead any project like a true professional
Management
Why Employee Buy-In Is the Key to Your Company's Success
Understanding the ROI of having an engaged team