Why You Need to Audit & Update Your Standard Operating Procedures

The importance of testing and applying best practices to your workflow
by Gregg M. Schoppman
Tuesday, July 17th, 2018

Whether it is to mitigate the risk of security breaches or simply to provide new features, the ubiquity of updates and upgrades has become ingrained in the way society uses everything from smartphones and tablets to video game consoles. Unfortunately, this culture of consistent renovation does not automatically transfer to business processes. One document rarely sees the prevalence of such renewal: the procedures manual. In fact, exact dates could be assigned by the coating of dust that covers the three-ring binder sitting atop the shelves of managers’ and superintendents’ offices across the industry.

It is the same ambivalence toward monitoring company procedures that has led to an ever-increasing lack of consistency in the way managers and superintendents govern and lead their projects. Businesses often wrestle with maintaining standards of management, thus creating “Bob’s Way” and “Mary’s Way,” rather than one standard way of operating. In the end, the final version is largely dependent on the individual, rather than a set of best practices that have been tested, vetted and applied by the management team.

The first question every company owner should ask relates to how loosely management procedures are driven. For instance, is the operations manual a suggestion or a standard? One reason management sometimes becomes apathetic is the presence of an irrelevant standard. If the process is not relevant to the current business model, it may quickly be scrapped. Are the processes geared toward a hard-bid environment even though the business is now focused on design-build? Are the tools integrated into the current technology platform? It’s easy to see why a superintendent or manager might develop their own processes when the company is deeply grounded in an antiquated system.

This is not to say that the original versions should be abandoned. Better yet, this is the time to integrate version 2.0—an improvement upon previous processes. It is imperative that you embrace a culture of continuous improvement to capitalize on these updates. Strict adherence to the status quo is increasingly dangerous in this quickly evolving marketplace. Even if the enhancement is as simple as revising a preconstruction planning agenda or creating a new version of the last planner tool, no task should be relegated to the status of sacred, immutable territory. In fact, small revisions might get the engine of innovation started and lead to greater incremental progress. 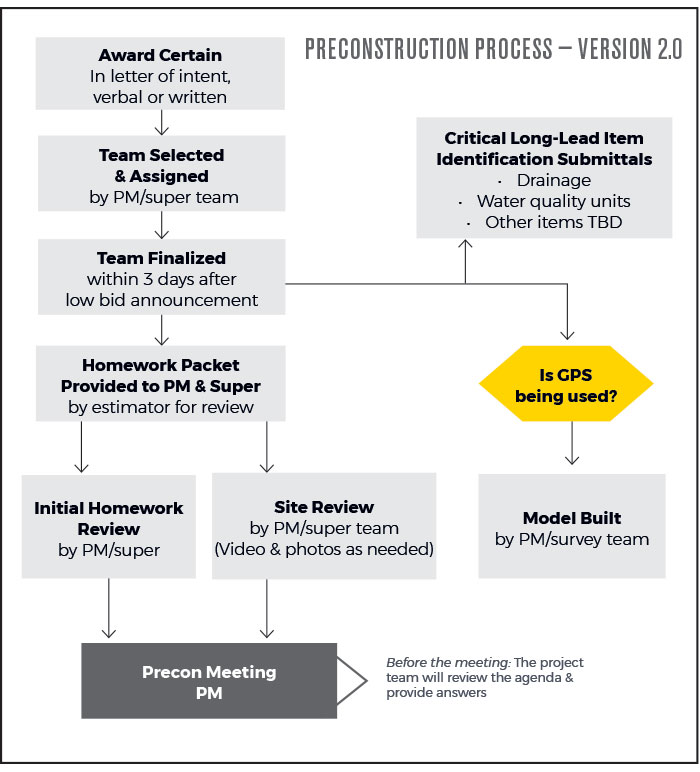 There is something surreal about using words to describe a thing that is multidimensional. Consider an engineer who uses a written narrative to illustrate a complex system like a water treatment plant. Rather than using drawings, the engineer describes everything in words. This makes the system seem even more complicated and might only be understood by the engineer. Why take the same approach to internal processes? Consider the comparison of the Preconstruction Process Versions 1.0 and 2.0 provided here.

This commentary is less about whether the steps listed are correct for the process and more about creating a linear, logical roadmap for individuals to follow, which is even more important in an industry (like construction) that relies so heavily on visual models and depictions to provide direction. Once this is done, steps in the process can be assigned ownership to drive the most important element of version control—accountability.

Are company procedures presented as suggestions or dogmas? Most leaders would say there is an expectation that procedures are strictly followed. But, how does the management team know if they are followed?

Often, the only indication is in the monetary gain or loss at the end of a project, which is the equivalent of gauging the success of a diet simply by stepping on a scale and failing to measure food intake or exercise. For a company to effectively manage the efficacy of its processes, it must measure them proactively.

For instance, if a company begins 10 projects in a month, there should be evidence of 10 preconstruction planning meetings. While it sounds puerile to measure processes, such as these, it has a demonstrative impact on the bottom line. The metrics can also reveal a great deal about the aforementioned categories. Weak adoption of processes may indicate deeper issues, such as lack of relevance. Without this information, companies develop blind spots that mask the real problems in their operations. Measuring monthly costs is important, but simply using these metrics to manage a business is like driving a car with the rearview mirror only.

Most operating manuals are 80 to 90 percent effective. Preconstruction planning doesn’t change that percentage dramatically enough to necessitate wholesale overhauls. However, it is imperative that businesses ensure these guidelines are in fact driving the processes, by following, measuring and monitoring them throughout each project.

Gregg M. Schoppman is a consultant with FMI Corporation, management consultants and investment bankers for the construction industry. Schoppman specializes in the areas of productivity and project management. He also leads FMI’s project management consulting practice. Prior to joining FMI, Schoppman served as a senior project manager for a general contracting firm in central Florida. He has completed complex construction projects in the medical, pharmaceutical, office, heavy civil, industrial, manufacturing and multifamily markets. He holds a bachelor’s degree and master’s degree in civil engineering, as well as a Master’s of Business Administration. Schoppman has expertise in numerous contract delivery methods, as well as knowledge of many geographical markets. Visit fminet.com or contact Schoppman by email at gschoppman@fminet.com.