High-frequency (HF) technology has been used for more than 30 years, but only recently has it become more widely accepted. Originating in the military, HF technology has been adapted to the construction industry, which has grown to accept it in wall and wire saw equipment. Now, the latest generation of modern HF technology can be found in power cutters, ring saws and core drills. Modern HF technology is now one of the most efficient power sources, fitted to the most ergonomic and versatile tools in the history of the concrete cutting industry. More important, this technology has helped increase operator safety on the jobsite due to its low weight, increased maneuverability and low vibrations.

In most cases, the latest changes to HF technology enable more power to be produced in a smaller unit. This differs from old HF generators that were used to run the first HF machines. Those generators had no versatility to change speed or frequency and were only designated to one HF machine. Modern HF technology uses inverters, or power packs, to produce a higher power output from a lower power input. Inverters take the 50- or 60-Hz input power, rectify the AC power and change it to DC power. Then they chop up the power from 0 to 1,500 Hz depending on the motor revolutions per minute (rpm) needed for the desired power output. It’s like making an AC “wavy line” flat to look like the DC line. The flatter it becomes, the faster the motor runs. For example, a conventional 480-volt, three-phase motor running on 50 Hz will spin at 1,500 rpm, but at 60 Hz, it will spin at 1,725 rpm, and at 1,500 Hz, it will spin at 15,000 rpm. This motor speed is converted into horsepower in a much smaller package.

Modern inverters are designed to be used with a conventional power supply—480-volt, three-phase, 50/60 Hz—making them much more versatile. 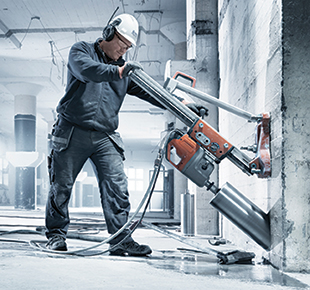 Contractors no longer have to make a large investment in an HF generator that is cumbersome and only can be used with 400 Hz equipment. New inverters also protect themselves against overload, overheating and a number of other situations that could cause severe damage. More important, they are much safer for the operator. In some cases, the machines are equipped with wireless remote controls, which enable operators to complete their work more safely and efficiently than formerly possible.

HF machines differ from their gas and hydraulic counterparts in several ways. When compared with gas machines, HF power cutters, for example, have a better power-to-weight ratio.

Removing these components from the machine also lightens the cutting machine and makes it easier to transport.

When compared with hydraulic machines, another main difference can be found in the hoses connected to the machine. Hydraulic hoses are a thicker gauge and hold hydraulic fluid, both of which are heavier than the HF hoses and electric current. Hydraulic machines are more difficult to maneuver, and the operator can become fatigued more quickly.

Most HF machines are connected to their power source by a few, lighter cables, making them easier to move around a jobsite. This allows the operator to be more productive with less physical strain.

Another advantage of HF equipment is a lower vibration level due to the use of electric power. While an electric machine will vibrate some, the vibration level will be significantly less than in a gas-powered machine. The amount of vibrations a machine produces directly affects how quickly an operator will become fatigued. A tired operator could mean someone who starts to use the machine in an unsafe manner and also decreases the amount of cuts executed over a period of time. Fewer vibrations help decrease operator fatigue and enable them to use the equipment correctly and safely. In some cases it also can decrease vibrations on the blade, which can lead to improved blade performance and life.

As mentioned previously, the HF converter uses fewer, lighter cords than a hydraulic machine. This makes setup of HF systems simple and quick, because there are less pieces to assemble, which saves time and helps protect the operator from injury. There is also less risk of hoses breaking or leaking hazardous hydraulic fluid.

Some hydraulic and HF wall and wire saws are operated by remote control. Connected by a single cord, they enable the operator to move around the job. Several newer HF models have Bluetooth wireless technology to facilitate even more freedom and to eliminate the chance of getting tangled in the cords, ultimately creating a safer environment for the operator.

Hearing loss is a danger on any jobsite where loud equipment is being used. However, new HF technologies are helping to minimize these noise levels. When you compare a gas-powered machine with an electric-powered
machine, the electric-powered machine will be quieter. When using a HF power cutter or drill, the majority of the noise will be the blade or bit cutting the intended material. Hearing protection is still important, but HF machines are less likely to contribute to hearing loss because they contribute little additional noise to the surrounding environment.