Commercial and multifamily construction starts in the top 10 metro areas dropped 23% during the year with only one metro area—Phoenix, Arizona—reporting an increase. In the second largest group of metro areas (those ranked 11 through 20), commercial and multifamily construction starts also lost 23%, with only Denver, Colorado, and Kansas City, Missouri, posting an increase for the year.

The New York, New York, metropolitan area continued to be the largest market for commercial and multifamily starts at $23.5 billion but suffered a stark 25% decline from 2019. The Washington, D.C., metro area managed to maintain its second place standing despite an identical decline in 2020 lowering commercial and multifamily starts to $8.9 billion. The Los Angeles, California, metro area, which fell 21% to $7.4 billion, ranked third.

This group of metro areas accounted for 17% of total U.S. commercial and multifamily activity in 2020, the same share as in the previous year.

Hear directly from Chief Economist Richard Branch his take on what’s happening in these top ten locations in his Metro in a Minute updates.

“The pandemic is having a significant negative impact on commercial and multifamily construction across the country,” said Branch. “While some areas stabilized over the summer, the current wave of the virus has further hindered activity. The recently passed $900 billion stimulus plan will go a long way towards re-energizing the economy. The construction sector will show signs of recovery in 2021, but, the road back to full recovery will be long and difficult. The effects of the pandemic on the U.S. economy and building markets will be felt for several years.” 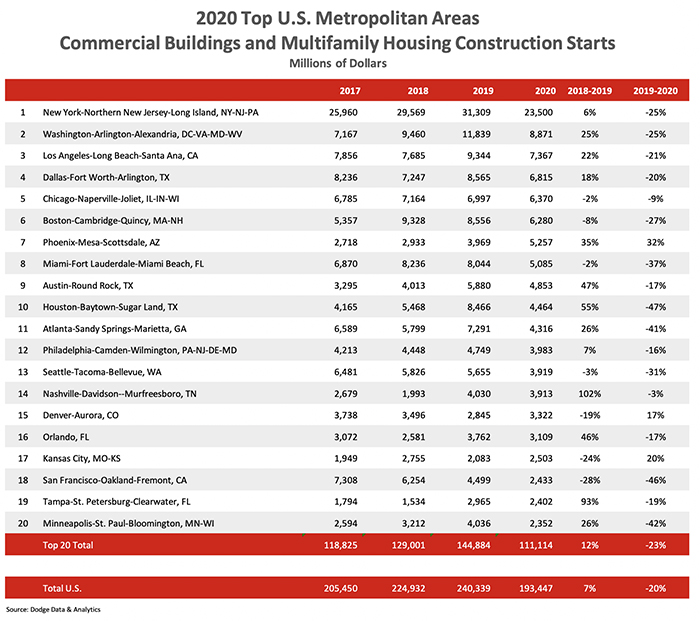