NEW JERSEY (July 22, 2020)—The COVID-19 pandemic and resulting recession have wreaked havoc on United States building markets. According to Dodge Data & Analytics, commercial and multifamily starts were quite healthy during January and February but stalled as the pandemic hit the nation in March.

For the first 3 months of 2020, U.S. multifamily and commercial building starts inched up 1% from the same period of 2019. The commercial and multifamily group is comprised of office buildings, stores, hotels, warehouses, commercial garages and multifamily housing. Not included in this ranking are institutional building projects (such as educational facilities, hospitals, convention centers, casinos, transportation terminals), manufacturing buildings, single family housing, public works and electric utilities/gas plants.

The full force of the pandemic bore down on U.S. construction starts in April as economic activity virtually shut down and local restrictions on construction took effect. Construction resumed in some areas in May allowing starts to post a mild gain over the month. Advances continued in June. However, the damage to commercial and multifamily construction during the first half of the year was palpable.

Starts plunged 22% below the first half of 2019, with only warehouse construction posting a very small gain. Commercial and multifamily construction starts in the top 20 metropolitan areas posted a similar drop of 22% through the first 6 months of 2020. 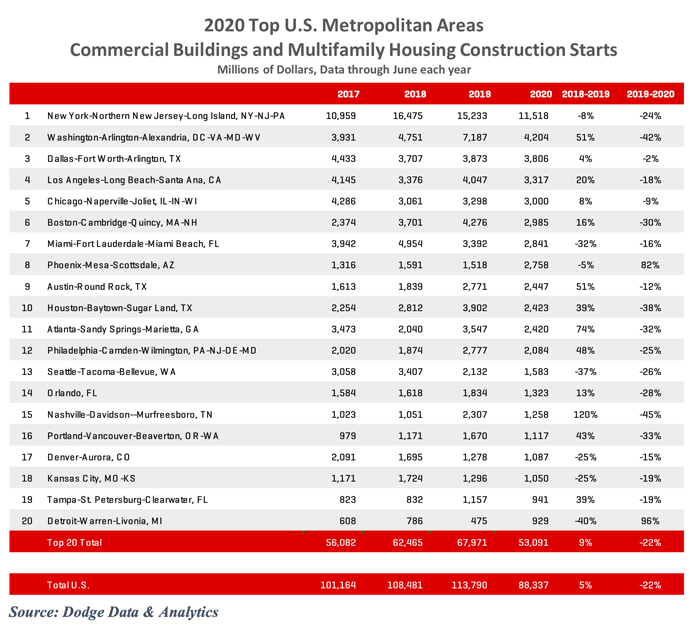 “The COVID-19 pandemic and recession have devastated most local construction markets,” said Richard Branch, chief economist for Dodge Data & Analytics. “Across the board, building projects have been halted or delayed with virtually no sector immune from damage. Construction starts have begun to increase from their April lows and there is cautious optimism that as the year progresses construction markets around the country will begin a modest recovery. However, the recent acceleration of COVID-19 cases in the South and West as well as the upcoming expiration of expanded unemployment insurance benefits (from the CARES Act) puts the recovery at significant risk and could undermine the construction sector’s ability to grow.”