How to Mitigate Risk with Security Cameras

Throughout the last decade, the construction industry has spawned an entirely new black market industry—construction theft. According to the National Insurance Crime Bureau, as much as $1 billion in construction tools, equipment and materials is stolen nationwide each year, 90 percent of which is taken directly from construction sites. Such losses increased by 64 percent between 1995 and 2001 and that trend is continuing upward at
an alarming rate.

The need for remote security monitoring on construction sites is evident, yet many contractors continue to struggle with successfully protecting their investments. Most construction sites rely on human presence and fencing to ward off theft and vandalism.

When theft occurs during daylight hours, it’s usually a subcontractor removing their own materials or others’ materials from the jobsite, leaving the main contractor to remedy the issue by claiming the damages on an insurance claim or paying out of pocket to keep the construction progress moving forward. 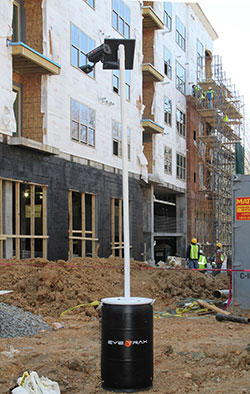 Jobsites are especially vulnerable at night, when contractors and crews have gone. The only line of defense against perpetrators is a fence, if available, which only slows them down by a few minutes.

Theft and vandalism are better thwarted by catching perpetrators in action or with pictorial evidence. Many construction security cameras are equipped with infrared night-vision technology, motion sensors to detect people or vehicles in action, and internal batteries to prevent tampering with the power source.

“Monitoring my company’s jobsites with security cameras has helped streamline the construction process by providing us with live, real-time pictures of the progress and conditions of various construction sites,” says Charlie Caputo, owner of Spectrum Building Co. Inc. in Mooresville, North Carolina.

Caputo owns several construction cameras and says the information they provide “has reduced the number of trips to jobsites, eliminated theft and helped resolve conflicts with other contractors.”

North American Lawn & Landscape employs 250-350 people each year during peak operating times and maintains more than 100 vehicles in its equipment fleet. Owner Doug Ehmann concurs with Caputo on the benefits of a security camera system. “We employ multiple cameras to have 24-hour surveillance on key areas,” he says. “We’ve placed them strategically to monitor jobsite entrances and exits, the fuel tanks and pumps at our operations facility and our nursery where we store thousands of plants and other jobsite materials.

“When we first installed these cameras,” says Ehmann, “we uncovered a few instances that we were able to quickly and proactively handle, and since that time, we have had no issues —the presence of the cameras is a
huge deterrent.”

Today, most construction security cameras on the market are either modified hunting cameras or high-end, time-lapse video cameras that do not offer motion-sensing technology.

A hunting camera is an inexpensive alternative, but lacks the picture quality and motion-sensing range because it is designed to watch a deer trail and not a large remote area.

Most hunting cameras require the end user to manually retrieve the internal SD card to view the pictures on a computer. Although this method is the least expensive option, by the time a contractor realizes a jobsite has been vandalized, it’s likely too late to catch the perpetrators.

Most high-end, time-lapse construction cameras are designed for taking high-resolution pictures on a timed interval.

However, many of these cameras do not have motion-sensing technology or night-vision capabilities.

Wireless, solar-powered or cellular-based construction cameras fill a void in remote areas where security and surveillance are problematic due to the expense of providing power and Internet connections to those areas.

Ehmann uses a cellular-based camera system and likes the flexibility. “This enables us to put a camera wherever we think theft might be an issue, proactively protecting our employees and equipment, as well as our clients’ investments,” he says.

“My clients appreciate that they are able to have their own username and password in our security camera system,” adds Caputo, “because it allows them to view their construction projects at their convenience from the comfort of their homes or offices.”

When considering the purchase of a construction camera for remote security purposes, it is important to understand the differences in motion-activated camera systems.

Most motion-detection camera systems are triggered by a pixel change within the viewing area. When the viewfinder in the motion-activated camera sees a percentage change in pixel color, it considers this an event.

This type of trigger can cause many false alarms because anything that changes in front of the motion-activated camera is considered an event. This could be the wind blowing leaves on the trees or trash blowing around a construction site. When a motion-activated camera creates this many false alarms, the accountability of the entire security camera system is reduced.

A camera system that incorporates an integrated passive infrared sensor only recognizes events when measurable changes in thermal activity occur within the camera’s viewing area.

Once the event is captured by the camera, it will be time and location stamped and sent, along with all of the pictures from the event, immediately over the system’s secure cellular network to cloud-based servers for storage and retrieval.

This instantaneous alert is very important when attempting to catch perpetrators in the process of stealing equipment or materials, or committing vandalism.

When the recorded event is delivered to a mobile phone, it is only seconds old and, in most cases, the perpetrators are still located on the jobsite. With a quick review of the images, a contractor or project manager has enough time to call 911 and report the findings.

With live evidence, the police will likely consider this a “crime in action” and make every effort to immediately proceed to the jobsite.

Remote-site monitoring to catch perpetrators in the act is truly the only way to prevent these types of crimes.

When it comes to protecting a construction site from theft or vandalism, contractors cannot afford to wait too long to find the right remote monitoring security camera.

Jerry McSorley is the president of Eye Trax, a manufacturer of solar-powered security camera systems, headquartered in Charlotte, North Carolina. He has a mechanical engineering degree from the Rochester Institute of Technology. Prior to founding Eye Trax, McSorley owned a residential construction and land-development firm. For more information or to contact McSorley, visit eyetrax.com.

Risk Management
Protecting Your Business & Recovering From a Major Loss
Travelers insurance pro on project loss insurance & what it means for the construction market right now
Insurance
The 6 Rules of Risk Mitigation in Construction Contracts
Exploring the hidden issues sinking your profits
Business Management
Top 5 Risks for Set-Aside Contractors
Federal projects are a big deal for small contractors. But the risks can be big, too.
Software
The 3 Concepts of Collaborative Change Management
Examining tech's role in project changes & risk management on a construction site
Risk Management
10 Rules of Effective Crisis Management
Guidelines to prepare for peril & better control the outcome