With the exception of health insurance, it's a good time to be a buyer
by Jeff Cavignac
Friday, February 19, 2016

Like many businesses, the insurance industry is cyclical in nature. The insurance cycle is important to business owners because it directly impacts insurance premiums. As for insurance pricing today, Table 1 provides a historical picture of insurance industry rates calculated by MarketScout, with 2004 as the base year. The industry had been fairly profitable and surplus was strong, so rates started to come down. From 2004 to 2011, rates actually dropped about 40 percent. When prices went down, combined ratios and profits began to deteriorate. Rates started to increase, and since 2011, average rates have gone up about 15 percent. Still, they remain 30 percent below what was charged in 2004, and the rate increases have begun to taper off.

Today, underwriters want more rates, but the high surplus is keeping the industry competitive. Although rates have increased, on average, about 1 percent through July 2015, that is anticipated to change by 2016, and a modest rate decrease is predicted. 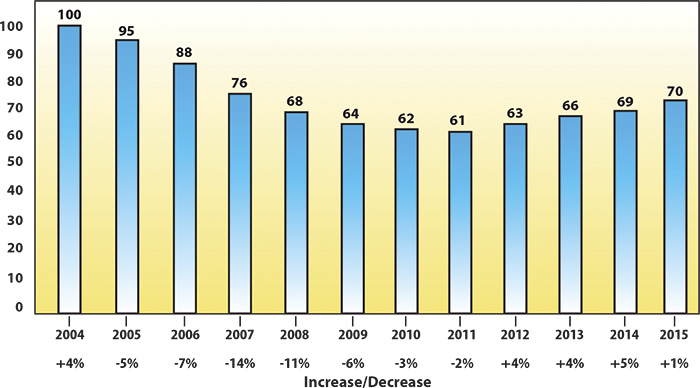 In short, the industry is flat. However, this will differ by account and policy type. Preferred risks in desirable industries with profitable loss histories may see rate decreases of 5 percent to 10 percent or more, while challenging accounts in high-hazard classes with poor loss records can still see substantial rate increases.

Allied lines refer to general lines of insurance that most companies need to purchase. This includes general liability, property, inland marine, auto, workers' compensation and umbrella coverages. Workers' compensation is addressed separately, but in general, allied lines will track with the comments made above. If you are an average risk in a decent class, your rates should be flat.

Executive risk refers to directors and officers liability, employment practices liability and fiduciary coverage. This can also include crime, kidnap and ransom and cyber. Executive risk is more volatile than the allied lines. Current pricing is being affected by the last economic downturn. The poor results experienced by many businesses and the layoffs and reductions in force (RIFs) have increased loss ratios. Insurance companies tend to be reactive in their pricing, and these poor results are now manifesting themselves in higher premiums. While it is difficult to provide an average rate increase (10 to 25 percent is not uncommon), it is also misleading. Every account is different and individually underwritten. You should start early on these renewals and go into detail on why your firm is, in fact, a good risk and should be credited accordingly.

In general, professional liability lines are flat like the industry at large, but once again, this can vary by profession, specialty and account. Architects and engineers currently have more options than they have ever had. Every one of these policies is different and coverages can vary greatly. In addition, the claims handling and risk control services offered also vary.

Some insurers simply offer a policy (often a lousy one) with a subbed-out claims department. Others provide broad coverage, in-house specialized claims expertise and sophisticated risk management. Accountants, attorneys and other professionals also have a wide range of suitors, but, similar to the design profession, coverage, claims and risk control are all over the board. This underscores the importance of dealing with a broker who specializes in your industry and knows the differences in coverage and the pros and cons of each insurance company.

Compensation is trending positively after 6 years of rate increases. Table 2 shows the average rate charged per $100 of payroll in California. Rates peaked in 2003 at $6.29. The reason for the higher rates is attributable to the lousy underwriting results from 1999 to 2002. As rates went up, results measurably improved and, from 2003 to 2009, rates fell off 67 percent, to an average of $2.10. 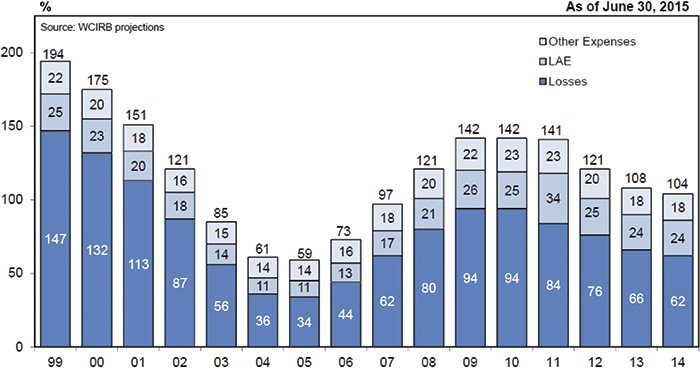 While this was good news for insurance buyers, it was bad for the insurance industry, and rates started to go back up to combat the poor combined ratios. Since then, rates have increased over 40 percent, but it is important to remember that they are still less than half of what they were in 2003. While rates continued to increase modestly through 2014 and 2015, it is anticipated that rates will be flat in 2016. Note that this is an average. Every classification (there are over 250) is affected by the experience of that class. Some will go down fairly substantially, but others could go up.

Surety Outlook 2016: Do More With Less

There has been a slow and steady improvement in the surety industry in recent years, which has been mirrored in the United States economy and other related financial markets. The surety outlook for 2016 will remain positive, but will be challenged by factors that influence the construction and commercial business markets.

Astute contractors have not abandoned the lessons learned in the post-recession recovery. Construction firms today are leaner and meaner with a focus on bottom line results. An overall acceptable profit margin for efforts expended is mandatory. However, owners' expectations are still in a buyers' market mode, interest rates are artificially low, fuel and material prices are cheap, technology applications are ever improving and there is a growing worker shortage. Going forward, successful firms will cautiously continue to grow their operations with an eye on doing more with less.

Medical insurance costs in 2015 increased between 20 to 40 percent, due to the changes in the Affordable Care Act (ACA). The early renewal strategy in 2013 helped employers delay the effects of the law, and "grandmothering" helped in 2014. The 2015 medical renewals for companies with 2 to 50 employees realized all the impacts of the law.

In 2016, companies with 51 to 100 employees will be considered small groups in California, and the ACA changes and increases will be taking effect. Although the federal government is giving states the opportunity to define small and large groups, California will likely set the dividing number at 100 employees.

Rates are currently determined by the employee and their dependent's individual ages, plan design and location of the company. A family of five will pay for each family member based on each individual's age and the plan they select. Some younger employees or families with only one child may realize lower premiums. All of the small group plans have changed to conform to the law, and most have higher deductibles and copays. Therefore, employees will have to pay more when they use the services.

In 2016, the insurance carriers will be trying to figure out how to survive after implementing all of the ACA requirements. Rates will continue to increase as the plan's taxes and fees continue to rise.

Employers should budget a 10 to 15 percent increase, and depending on plan change options, rates could settle in at +5 to 10 percent. Dental, life, vision, disability and jobsite products continue to remain extremely popular benefits for employees.

It is a pretty good time to be an insurance buyer, with the exception of health insurance. The industry has abundant surplus and decent results. Most businesses will be able to negotiate flat rates and some businesses may even see rate reductions. However, insurance premiums need to be kept in perspective.

They are only one component in the cost of risk. Time spent managing risk, training employees to be safe, dealing with claims, funding uncovered claims and a number of other costs all factor in as well. For many large companies, insurance premiums can be less than half the total cost of risk.

While you should understand the economics of the insurance industry and how they can affect your business, there is nothing you can do to positively affect it. However, you can positively affect your risk profile. In the long run, the only way to reduce the cost of risk is to reduce the frequency and severity of claims that drive the cost. An effective risk control program and a partnership with the right broker are key to lowering your costs.

Insurance
Insurance Update: Q4 2021
8 tips for managing risk amid fluctuating market conditions
Insurance
Who Assumes Responsibility for an Injured Worker?
How to navigate subcontracting & workers’ compensation issues in the construction industry
Insurance
An Examination of the Construction Underwriter's Outlook
How to work with your surety partner to keep communication open & efficient
Insurance
The 6 Rules of Risk Mitigation in Construction Contracts
Exploring the hidden issues sinking your profits
Insurance
Workers' Compensation 101 for Construction Firms
4 steps to keep claims from derailing your company & its processes