A Look Back at 75 Years of the Backhoe Loader

JCB examines the past, present & future of this compact jobsite workhorse
by Ethan Clowes
Wednesday, January 20, 2021

The post-World War II era was one of enormous innovation and economic growth. As millions of servicemen returned home, the housing market exploded, with 2.5 million homes built from 1946 to 1948. By the 1950s, nearly two-thirds of all industrial construction was taking place outside of cities as suburban America was forming. In fact, residential construction in the suburbs accounted for 75% of total construction at the time.

Meanwhile, some of the world’s most pioneering inventors in the heavy machinery industry saw the current challenges, had a vision for the future, and manufactured the first backhoe loaders to meet the demands in construction, infrastructure and farming.

In the United States, a backhoe prototype was assembled by Massachusetts engineers J. Holopainen and Roy E. Handy Jr., who mounted a hydraulic swing-frame digger to a Ford Model 8N tractor. Their 1948 patent featured a swing frame breakthrough that allowed the hydraulic digging arm to swing to the side to dump the bucket and included an outrigger bar and high flow control. In 1954, however, the inventors failed to defend their swing-frame patent, and other manufacturing companies began to produce backhoes.

In Great Britain during the same time frame, Joseph Bamford, founder of Joseph Cyril Bamford Excavators Ltd. (JCB), was on a business trip in Norway when he saw a lightweight excavator on a trailer hitched to the back of a tractor. Building on the idea, he attached a prototype excavator with hydraulic arms to the back of a front loader.

Naming it the Mk 1, Bamford pioneered the first backhoe loader, creating a single machine with a hydraulic rear excavator and front-mounted shovel, bringing hydraulic power to construction. Bamford quickly realized that operator comfort and safety resulted in increased productivity, and the launch of the JCB Hydra-Digga Loadalls in the late 1950s featured a comfortable cab that included a heater.

By the 1960s a new range of backhoes were on the market, featuring the innovation of dual hydraulics, a three-in-one backhoe bucket and a two-lever backhoe control system. It was clear this machine was revolutionizing the building industry, increasing productivity and reducing the reliance on manpower.

By the 1970s, backhoe loaders offered a larger cab and a powertrain with exceptional strength. In the early 1980s the launch of the JCB 3CX Sitemaster introduced the modern backhoe loader to the world. It featured a six-in-one clam shovel front bucket with fold-over forks and telescopic dipper arm with lifting hook, adding to the machine’s versatility. In 1988, JCB unveiled its most unusual backhoe loader—the JCB GT—powered by a Chevrolet V8 engine and capable of reaching 100 miles per hour (mph).

As construction sites became more condensed in the 1990s, innovation again met the demand with the availability of construction grade compact backhoes. These machines are 35% smaller than the standard backhoe, with the ability to turn around in a single carriageway.

Compact backhoes can work within the single lane of a roadway with minimal disruption and are the ideal solution for niche applications, such as utility operations and commercial landscaping. The JCB 1CX is the world’s smallest backhoe, combining the two most popular machines in North America, the compact excavator and skid steer loader. By 1997, the models offered twin-ram slewing and further updates to the cab. 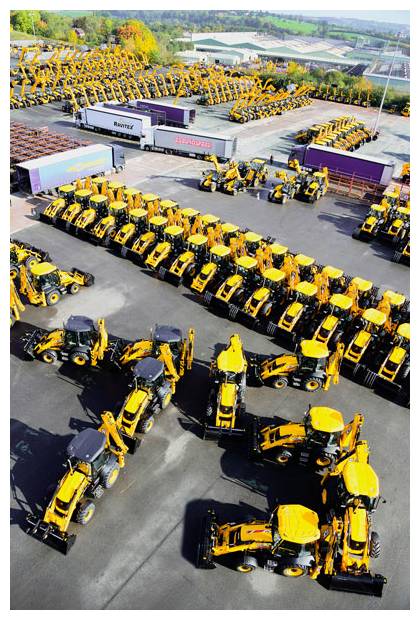 Additionally, the high mobility engineer excavator (HMEE) was manufactured to meet the specific needs of the U.S. Army, reaching speeds up to 60 mph. Backhoe loaders offered unmatched fuel-efficiency and exceptional power, with some models on the market requiring no exhaust aftertreatment.

Most recently, automation is the most predominant innovation that has transformed the functionality of the backhoe. Automated features mechanize previously manual tasks, ultimately making the backhoe more productive. For example, an automated idle feature helps reduce fuel consumption, and an automated drive function allows the operator to drive at a constant engine rev that determines the speed when traveling the machine.

Hydraulic system components have improved as well, many of which are monitored by onboard computers and sensors positioned around the machine. This provides enhanced settings control for further cost and time savings.

Technological advancements have also ushered in telematic features, which allow for planned maintenance schedules and instant notifications when a service is due, including critical alerts if there are any serious mechanical or electrical problems with the machine. This timesaving innovation means issues are quickly resolved and machines are fully operational and back on-site with little downtime. Not only do telematics keep loaders working, but they also keep them safe.

Machine location tracking acts as a deterrent against theft and allows stolen machines to be recovered. Real-time geofencing notifies construction managers when their machine moves outside of permitted zones, while curfew alerts inform them of unauthorized usage.

With technology improving and the “internet of things” connecting more devices than ever, we will likely see telematics being used for even further advancements, such as flashing software, diagnosing machines, changing machine settings or even to operate the loader remotely. It will be interesting to see where the zero emissions movement will take the backhoe, as this is a challenge that remains to be solved.

While we cannot know for certain exactly what the future holds as far as advancements for the backhoe loader, this versatile machine will certainly remain the multitasking workhorse on a wide variety of construction jobsites, as it has been for nearly 75 years.

Ethan Clowes is the backhoe loader, wheel loader and site dumper product manager for JCB North America. A mechanical engineer, Clowes has “incorporated engineer” status with the Institute of Mechanical Engineers. He has been with JCB since 2014, and currently provides target product specifications to meet the needs of JCB customers. He defines overall strategy, product roadmaps and technical/feature specifications for new products based on long-term product vision, user needs, technical and market trends and platform capabilities.