Should You Use Pilot or Manual Controls?

The popular pilot controls commonly offered in hydraulic excavators have not historically been offered on backhoe loaders. However, as technology continues to play a greater role in our day-to-day lives, equipment manufacturers are identifying and catering to new trends. One such trend is the desire for pilot controls in backhoes so operators can easily adapt from operating an excavator to a backhoe, without having to change the way they are accustomed to working on the jobsite.

Until recently, very few manufacturers offered pilot controls in backhoe loaders. Today, most manufacturers have pilot controls as optional equipment in order to meet the demands of the tech-minded, who prefer a joystick-type control similar to those used in video games.

A traditional backhoe with manual controls, or "wobble sticks," as they are commonly referred to, boasts a much simpler design than its equivalent pilot control model. Machines with manual controls have the control levers mechanically connected to the spools in the control valve. When a control lever is moved, the mechanical connection directly shifts the spool, allowing oil from the pump to be directed to a cylinder to perform a given function, such as moving the boom, bucket or swing. On a pilot-control backhoe model, hydraulic lines are run through the pilot-control pods. When a function is requested by the operator, oil from the pilot controls is redirected through the hydraulic lines to the control valve to shift the control valve spools in order to perform a given function. 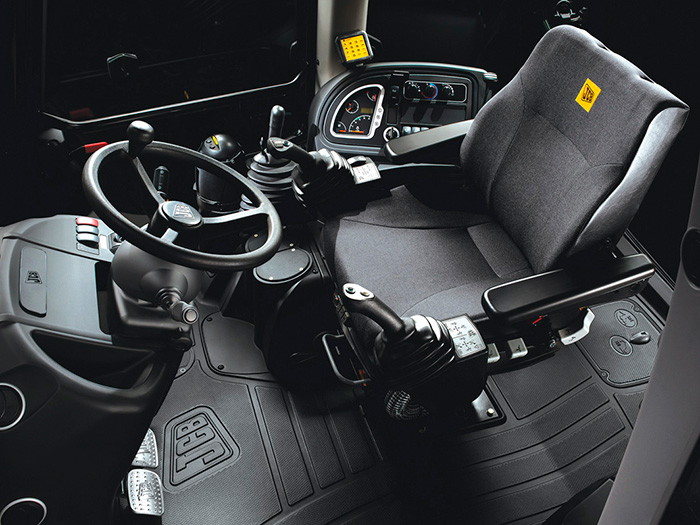 Although pilot controls have been a common feature on excavators for some time, switching from a pilot-control excavator to a manual-control backhoe typically resulted in a steep learning curve for the operator. Backhoe manufacturers recognized this and have responded by developing pilot-control models to make the transition between operating excavators and backhoes easier on the operator and more productive for business owners with mixed equipment fleets.

While manual controls may seem like outdated technology, many operators continue to prefer them over pilot controls for various reasons. First, this control type is generally more economical, costing between $2,000 to $5,000 less than pilot-control models. But it's not all about cost. Experienced operators like the feedback they receive from the hydraulic system when using manual controls. For example, when digging a trench on a manual control machine and a hard object is encountered, the operator can feel the increase in pressure, and, therefore, resistance on the spool, through the mechanical connection. This alerts the operator that they have come in contact with something other than dirt and allows them to quickly react to avoid damage to both the object and the machine.

Pilot controls come with their advantages, too. They allow operators to quickly and easily switch from a backhoe to an excavator operation pattern, essentially swapping the boom and dipper functions through a switch or pedal in the cab. In addition, pilot-control machine operators enjoy less lever/joystick effort, reducing fatigue and improving overall comfort.

Designing machines with seat-mounted pilot controls was a challenge. Not only do hydraulic lines need to be routed up through the seat, similar to those on an excavator, but also, in a backhoe, hydraulic lines need to be positioned so that the operator can spin from the forward position, using the loader, to the rear position in order to use the back end of the machine. While this presents an engineering challenge for many manufacturers, the vast improvement in comfort and ergonomics for operators makes it a design that many strive to adopt.

There are a few key factors that determine whether a customer purchases a machine with manual or pilot controls. The increased complexity of designing and manufacturing a machine with pilot controls results in a higher price tag on machines equipped with this feature. Large fleet owners and rental companies looking to maximize their return on investment tend to buy a larger percentage of machines with manual controls.

However, this is beginning to change. More rental customers are asking for pilot-control backhoes, so rental companies are buying more of these units. They may not necessarily make the rental more profitable, but generally help the rental center attain the business. The ability to offer models with pilot controls allows operators the option to switch from backhoe to excavator controls for customization of the control pattern to their preferences based on the work at hand. Operators spending 10 or more hours a day in their backhoes are usually willing to pay extra for the added comfort that pilot controls deliver.

As manufacturers continue to look for ways to meet the changing demands of end-user customers, additional automation features, more comfortable designs and machines that are more efficient than ever before are expected to enter the equipment space. Features that were once only found on larger, production-class machines will continue to trickle down to midsize equipment, such as the backhoe loader.