How You Can Plan to Prevent Rework

Why this punch-list item may be ruining more than just your day
by Gregg Schoppman
Monday, January 27th, 2020

Try this exercise at your next staff meeting: Ask your employees if anyone knows the cost of rework. They might offer figures and amend them one, two or three times because, after all, if you put in the work wrong, you have to rip it out and put it back correctly. While this may be true, the final answer is never accurate. Take the following rework scenario, for example.

Pundits might argue that some of these items don’t have an actual cost. For instance, client confidence hardly reflects itself in a direct dollar figure. However, the contractor-client relationship is something that gets lost in the rework shuffle.

The above exercise was not meant to illustrate how many ways a firm can lose money, but, rather, to identify ways to mitigate the deleterious effects of rework.

Many firms still go through the motions of planning projects, work phases and trade partner work. Everyone is so focused on seeing work put in place, they forget to set themselves up for success. Some simple questions to ask your team during planning are:

Ultimately, there should be evidence of true project strategy, and leaders must vet these strategies long before the first shovel hits the ground.

Even with the prevalence of data harvesting on jobsites, firms fail to track issues and read the early warning signs. Furthermore, the issues are only exacerbated as crews scramble to work faster in congested workspaces, sacrificing quality for completeness. If the data is telling the project team and the firm’s leadership a story, why then are they not reading it and taking appropriate action? If rework was tracked in a manner that accurately quantified the impact, would it send a different message? 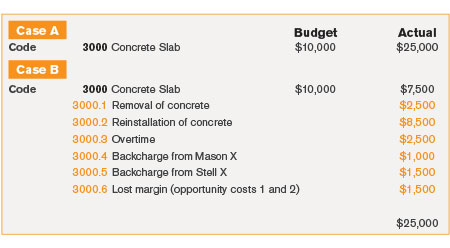 The figure above shows an example of the costs of one phase of work and rework. While it doesn’t include some of the more subjective cost impacts, it does provide interesting discussion points, such as: The original slab was technically under budget, so was it rushed, or was some sort of quality assurance not followed?

Additionally, the lost margin helps demonstrate the impact to other aspects of the firm’s work. In the low-margin industry that is construction, what are you doing as a leader to help reinforce the message that losing money in any phase of operation is not acceptable?

Even at the best of firms, the punch list is the ultimate mark of rework. How many items appear on your punch lists? If you laid your punch lists out for all of the projects you completed in the last 12 months, how many repetitive items would appear? While, hopefully, none of those items would have the dollar impact of the concrete example above, it is safe to assume that there are costs.

So many firms talk about a goal of having zero punch lists but do nothing to place focus on the right behaviors/processes during the installation of the work that will hedge against long punch lists. For instance, are quality standards outlined in a preinstallation meeting before a phase or trade begins? Is that phase evaluated once it is complete? Does the firm even have a standard of what “finished” and “good” look like?

Rework is kryptonite to a contractor. Failing to plan, educate, set standards, utilize data and understand the true cost in both the short- and long-term is foolish and expensive.

Gregg M. Schoppman is a consultant with FMI Corporation, management consultants and investment bankers for the construction industry. Schoppman specializes in the areas of productivity and project management. He also leads FMI’s project management consulting practice. Prior to joining FMI, Schoppman served as a senior project manager for a general contracting firm in central Florida. He has completed complex construction projects in the medical, pharmaceutical, office, heavy civil, industrial, manufacturing and multifamily markets. He holds a bachelor’s degree and master’s degree in civil engineering, as well as a Master’s of Business Administration. Schoppman has expertise in numerous contract delivery methods, as well as knowledge of many geographical markets. Visit fminet.com or contact Schoppman by email at gschoppman@fminet.com.