Examining What Contractors Believe Is a Cause for Skilled Worker Shortages

Taking a look at the industry employment barriers
by Donna Laquidara-Carr
Monday, September 6, 2021

Workforce shortages continue to plague the industry. Dodge Data & Analytics has been tracking contractor concerns about skilled worker shortages in both the commercial and civil construction sectors for several years and, even during the height of the pandemic, with many projects either slowed down or halted, these shortages continued to be a top-of-mind concern for many contractors. Now, as backlogs increase and optimism about the volume of projects grows, the challenge of finding a sufficient number of workers with the right skills to do the projects available has again pushed this concern to the forefront.

The issue of worker shortages has been explored in both the “Commercial Construction Index (CCI),” published by the United States Chamber of Commerce from research conducted quarterly with commercial contractors by Dodge, and Dodge’s “The Civil Quarterly (TCQ),” featuring research with civil contractors. In the first quarter of 2019, the CCI featured research on construction careers and the latest TCQ included new research on upskilling workers.

While the studies show there is no easy answer to the crisis, they suggest a few paths that the industry can take to tackle workforce shortages. 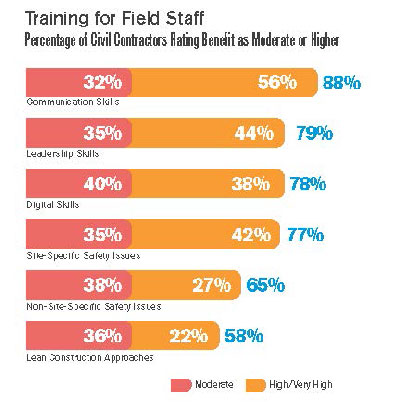 The most startling finding from the research featured in the CCI was the contrast between how those in commercial construction viewed a career in their industry, compared with the perception they believe that their potential workforce has of a career. When asked for their top three reasons that construction is a good career choice, 70% of contractors selected earning potential as a top reason. Other findings included the opportunities for career advancement, the ability to gain skills on the job, the diversity of work experiences and the creation of a tangible benefit like a building.

However, many contractors believe that misconceptions about careers in construction are having a negative impact on the industry. When asked to select the top misperceptions of construction, nearly two-thirds (61%) say that they think people perceive construction jobs to be “dirty jobs” and over half (55%) think that construction work is believed to require brute strength rather than training. Two other telling myths that many believe hinder their ability to find workers is the notion that construction work is just a job and not a career (selected by 52%) and several also think that people believe you can’t support a family on construction pay (selected by 40%). Both myths directly contradict the experiences that contractors themselves have.

These findings suggest the need to go beyond vocational schools and recruitment as a pipeline for careers in construction. A campaign to improve the general perception of what a construction career entails, and its rewards, would directly benefit the industry. Of course, few individual companies are able to make this change, but this should serve as a clarion call to unions and associations that they need to paint a portrait of the satisfaction of working in construction.

The latest TCQ from the second quarter of 2021 looks at upskilling workers in the industry. It demonstrates a commitment to worker training on the part of civil contractors but also suggests that many struggle to provide the robust levels of training needed in today’s workforce.

As shown in Figure 1, only about one-third (36%) of civil contractors surveyed say that they have a robust, ongoing training program for new workers that increases their skills. Additionally, 57% agree that, despite their efforts to provide training to new workers, they are limited by time and/or cost restraints in what they can provide. Their responses make it clear that training workers while dealing with their immediate project demands create obstacles to getting the skilled workforce they need.The study also showed that training needs to focus on full worker development, not just their ability to perform skilled labor tasks. There are three areas that contractors believe would benefit field workers at their company: communication skills, leadership skills and digital skills.

This clearly demonstrates that contractors need to train leaders in the field who can communicate effectively and use the digital tools available, and that a skilled worker shortage extends beyond the skills traditionally associated with construction.

Most contractors rely on internal resources for training field workers, along with online tools. While 79% report that their training is done by supervisors, only about one-third get their field staff training through pursuit of certification or from unions.

Given their reliance on internal resources and their tight schedules, it’s not surprising that when asked about the factors that discourage their company from investing in more training, the top factor for civil contractors is not having time (selected by 58%), with lack of staff and concerns about productivity impacts also consider top impediments by one-third.

The study also looked at interest in recruiting younger workers. The vast majority (86%) believe that the construction industry needs to do more to reach out to potential workers under 30, and roughly two-thirds (67%) believe it is harder to find skilled workers under 30 than older ones. Given the interest they have in increasing the pool of younger workers, it’s not surprising that most (63%) agree that younger workers can bring different skills to projects, with faster technology adoption and their ability to collaborate digitally considered to be the most valuable of these skillsets.

Taken together, these studies demonstrate that there is far more needed to address skilled worker shortages than stocking vocational schools with potential candidates. The studies reveal that the appeal and value of working in this industry needs to be brought to the forefront of the larger culture and that the skills required of a modern worker involve communication, leadership and digital acumen.

Additionally, the industry would benefit from an infusion of younger employees. They also suggest that the industry
needs to help contractors get the tools they need to help with skill development
in ways that can also accommodate the tight schedules and productivity
demands.

Donna Laquidara-Carr, Ph.D., is industry insights research director at Dodge Data & Analytics, where she provides editorial direction to the SmartMarket Report Series, covering such diverse topics as world green building trends, business value of BIM, managing risk in the construction industry, the drive toward healthier buildings, building a safety culture and lean construction. Her insights on these topics have been published in numerous industry publications, and she regularly conducts webinars and speaks about this research at events for diverse organizations, including the AIA National Conference, CMAA National Convention, AGC National Convention, the Lean Congress, Greenbuild, the inaugural WELL Conference and BOMA. Visit construction.com.