What You Can Learn from AECOM Hunt's Approach to Jobsite Tech

How the company integrates BIM on its smaller projects & one specific tool that is setting it apart from the competition
by Elizabeth Manning
Monday, November 5th, 2018

Although it’s hardly a new solution for the industry, the use of 3D modeling on construction projects is still not ubiquitous on and off the jobsite. But there are many advantages to using a 3D model on even a smaller project for a long-term client. Take, for instance, the Walnut Grove Elementary School, an AECOM Hunt project still in progress in a suburb of Indianapolis, Indiana.

When completed, the 85,000-square-foot facility will have two floors and feature a cafeteria, a gymnasium, 33 classrooms and more. Elements worth noting include a slide off the main thoroughfare; a steel walnut tree design feature in the main lobby; and modern classrooms that promote a flexible learning style. The project includes a solar array that will offset energy costs for the school, and an environmentally friendly landscape design.

The project is estimated to cost just over $40 million. At that estimate, Walnut Grove Elementary is a relatively small project compared to AECOM’s usual lineup. However, the school serves as an interesting case study for one area in particular: the ever-increasing use of building information modeling (BIM).

Although AECOM is a company familiar with using BIM on its projects, the Walnut Grove project was a bit of a different story. According to Nick Hugley, virtual design construction (VDC) manager for AECOM Hunt, the team was worried during preconstruction because the design team had not supplied 3D models for the project. “We didn’t even have a 400-level model for the steel until we were in the preconstruction process,” Hugley said.

However, the absence of the design models proved to be an interesting learning experience. During a meeting with the project subcontractors, the team mentioned the lack of a 3D design model. “We said, ‘We don’t have an architectural model, but we do have a a low-level-of-detail model  from the mechanical, electrical and plumbing team,’” Hugley said. “A guy on the structural team raises his hand and said, ‘We have a model for the steel.’”

As the conversation continued, the entire project team agreed that it felt like it would be taking a step backward to go back to a 2D environment. Hugley said he was pleasantly surprised by the enthusiasm from the subcontractors for working in a 3D model. “These days, just about everything we work on at AECOM Hunt is in a 3D model. And often, when we have a project owner who doesn’t have a model, we will usually go to a third-party service and have them create one. However, the budget wasn’t available for this one,” Hugley said.

Luckily, the AECOM Hunt team has the capability in house to create exactly what the project needed. AECOM acquired Hunt Construction Group in 2014, and the Indianapolis location is where some 200 AECOM Hunt employees now work.

The office is also the site of AECOM Hunt’s Innovation Center, where the BIM/VDC team goes to work every day. The center was built with tech in mind—industry solutions such as 3D printing and drone mapping are tested and used in the center, as well as a Studio H—an example of AECOM Hunt’s use of prefabrication to build a cleaner, more technologically advanced hospital room of the future (more on Studio H below).

But for the Walnut Grove project, the most important part of the Innovation Center is AECOM Hunt’s BIM/VDC team. The BIM/VDC team is a bit more diverse, and a bit younger, than the construction teams you often see on the jobsite. And they’re all focused on creating the most up-to-date models possible for AECOM Hunt’s the company’s projects using Autodesk’s BIM 360 platform.

For this project in particular, Hugley and the rest of the AECOM Hunt BIM/VDC team elected to take the 2D model from the MEP contractor and add in the elements the model didn’t have, such as ceilings, clash tests and more. Brian Hastings, VDC engineer for the Walnut Grove project, took that model and finished out the rest of the building. After Hastings completed taking the model and making it up to date, the rest of the teams involved in the project modeled their work in 3D.

Having a 3D model of the project has transformed the project process, according to Hugley. Because the entire project team now has access to an updated 3D model, the amount of rework has been significantly reduced. The model has also allowed the team to communicate with the project owner about changes to the project schedule and costs. 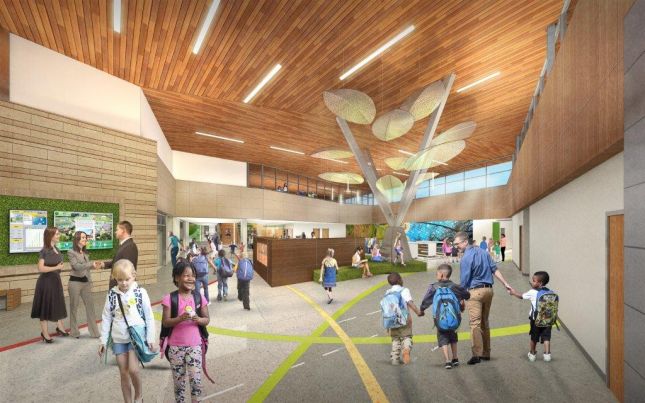 Where AECOM is Going Next

While the Walnut Grove project has posed its own specific challenges when it came to 3D modeling, the AECOM Hunt BIM/VDC team was well-equipped to rise to them. According to Russ Dalton, AECOM’s BIM director, AECOM is moving toward a design-build-finance-operate (DBFO) procurement model, and the widespread use of BIM on its projects only lends itself to the model. The move naturally pushes AECOM toward being a zero change-order company.

Currently, the BIM/VDC team is excited to see what comes of Autodesk’s July acquisition of Assemble Systems. According to Hugley, the combination of these platforms will give them more opportunity to work at an accelerated pace, and without as much rework. Dalton said AECOM is focused on improving data sharing for its platforms as well.

On the Walnut Grove project, one technology that has proved to be extremely useful is the use of drones for information capture. In addition to getting orthographic information for quantity takeoff, the team has also used its drones to film promotional videos for the project owner to use. The drone footage also gives the school a time-stamp of what the jobsite looked like at the time of each flight. The team also uses drones to get an idea of any potential safety issues prior to installing trusses or completing any big lifts. Currently, they are working toward completing drone flights more frequently, so footage is as accurate as possible.

What You Can Learn

Even for industry leaders like AECOM, BIM is a work in progress. But the benefits associated with the adoption of BIM are numerous. If you’re near the beginning of the implementation process, Dalton stressed the importance of not throwing all of the processes you have out and starting over. “Look at how BIM will integrate into the processes you have that work well already,” Dalton said.

When Dalton first went to work at Hunt, he collected every single piece of paper it took to build a project, and then flow-charted how the company completed each project. He said it took 30 days to do it, but it was valuable in showing the redundancy on each project. It was also helpful in figuring out where to integrate BIM into the process. “I can always tell when BIM gains traction on a jobsite, because there are no lights on in the planroom,” Dalton said. “Everyone is on their iPad.”

Despite its earlier difficulties concerning the model, the Walnut Grove project is no exception. The project team all voiced enthusiasm about having the project models accessible via the cloud. “We typically go in and say, ‘Please understand, thou shalt use BIM,’” Dalton said. For this project in particular, BIM seems to have made all the difference.

With a skilled labor shortage that shows no signs of slowing down in the near future, it makes sense to look to methods of production that save time for already understaffed crews. Enter Studio H. In the AECOM Hunt Innovation Center in Indianapolis, the team has built a hospital setting that showcases the newest tech in hospital construction. Prefabricated sections of the room are built off-site in a controlled environment, which helps cut down on costs and create more precise, replicable units for projects like hospitals that involve a lot of repetitive design. According to the team, a prefabricated hospital room takes 5 days to construct compared to the normal 15 for on-site processes.

Once assembled, the hospital room is a perfect example of the benefits of incorporating technology into a build. The room houses plumbing, wiring and more inside the wall panels, which aids in keeping the room sanitary long term. The studio’s surgical room can be customized for a surgeon who is either left-handed or right-handed.

The AECOM Hunt team also works with various providers to build a space that is as smart as it is clean. Amazon Echo, a voice recognition system, is integrated into the hospital room for patient commands, notes from the nurse and doctor, a speaker system, and more. The room also features a screen built into the wall that works like a touchscreen. AECOM Hunt worked with DIRTT, a customized-interior manufacturer for some of the features in the room, including the interactive screen.

According to Dalton, Studio H has allowed AECOM Hunt to show both existing and potential clients how we value design and engineering on a project. It also shows the importance AECOM Hunt is placing on prefabrication and overall innovation. At a base level, both Dalton and Hugley said it’s extremely helpful to be able to provide a visual model of what clients are getting by working with AECOM Hunt on hospital projects. Internally, Hugley said Studio H gives the team at the Innovation Center an opportunity to practice with equipment, such as scanners, drone footage and more.

Interested in finding out more about the latest in prefabrication and more projects like Studio H? CBO will be traveling to Autodesk University next week—stay tuned to our Twitter for updates from the show floor.

Technology
5 Tips for Successful Construction Software Implementation
How to ensure your next tech rollout isn't a bust
Technology
What the Right Network & Connectivity Can Do For Your Jobsite
The importance of using IoT to improve communication & safety on your projects
Technology
How to Use Tech to Train Employees & Track Leading Indicators
Send the right message to your workforce with the tools you are using
Technology
An Eye in the City Sky
Why it might be time to reconsider permitting the use of drones for development & construction in dense urban areas
Technology
Decoding the New Drone Privacy Policy Requirement
Exploring the ups & downs of the U.S. FAA law