How to determine the ROI of a bird's eye view
by Sally Huynh
Wednesday, December 30, 2020

State departments of transportation (DOTs) are responsible for building and maintaining critical infrastructure across the country and finding new and innovative ways to address the demands of future growth on the nation’s roads and bridges. And their jobs have only become more challenging.

In July, the American Association of State Highway and Transportation Officials (ASHTO) estimated a $37 billion loss over the next 5 years in state DOT revenue due to decreased fuel taxes and tolls as a result of the pandemic.

The West Virginia Department of Transportation (WVDOT) has turned to drones to save time and money—and the department is not alone. As of 2019, 36 out of 50 state DOTs were running drone operations internally.

In just over 2 years, WVDOT has seen a great return on investment, saving more than $340,000 in a single month. How is the department finding these savings? Let’s dive into three lessons learned from WVDOT’s drone program. 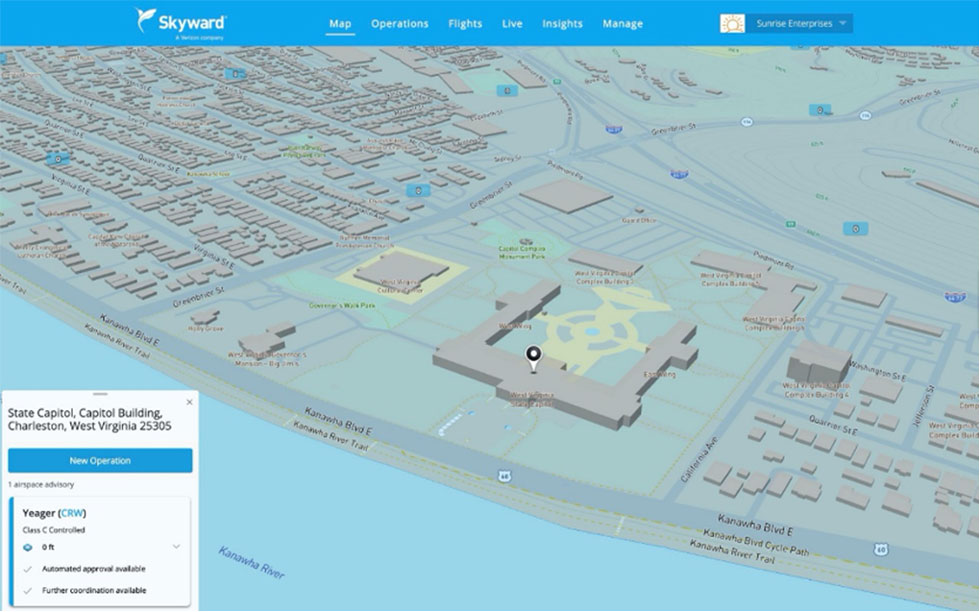 WVDOT’s drone program has more or less followed a “build, scale, innovate” model. In 2017, they began formally looking into launching a drone program. They started by building standard operating procedures (SOPs) with the help of the West Virginia Department of Environmental Protection, which already had a drone program.

“They were very helpful in building our SOPs,” said Travis Long, chief of surveys at WVDOT. “Like most government agencies, we had to have an internal policy approved and in place before we started our proof of concept projects.”

It took about 3 months to plan for the program, pitch it to stakeholders, and get the funding needed to launch the program. Then, in spring 2018, the WVDOT began flying test missions.

“We went into it very skeptical, as we started on this proof of concept project,” said Long. “But really quickly, we were able to identify that this could be really beneficial for us.”

WVDOT identified that drones could be ideal for stockpile surveys. Drones had the potential to speed up the process, reduce risk and increase accuracy. Jesse Bennett, statewide survey unit leader at WVDOT, flew several test missions to validate the use case. He quickly realized that drones had huge potential to transform this time-consuming and risky task. 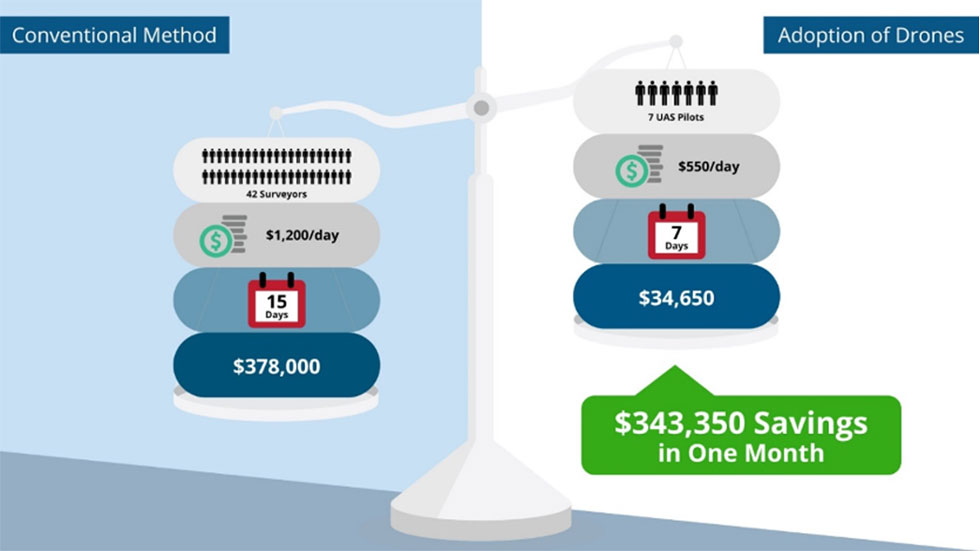 2. Scale Up & Rely on a Comprehensive Drone Management Platform

After laying a solid foundation of policies and a proof of concept, WVDOT entered the “scale” phase of implementation. The next step involved adding pilots who would fly by the rules. “We hand-selected our pilots,” said Bennett. “We wanted pilots who would be professional and responsible.”

Long and Bennett assembled a team of nine drone pilots. They were certified with the Federal Aviation Administration (FAA) as Part 107 commercial drone pilots, trained and educated on WVDOT’s SOPs. Long and Bennett also convinced the leadership team to invest in 12 drones to start their fleet.

“I saw the need for a solution like this from the very beginning, when I was the first and only pilot,” Bennett said. “I was manually entering flight logs and maintenance logs, and I was using about seven or eight different apps and websites just to plan and fly a mission.”

He began using the drone management platform as a single source to keep track of pilots, certifications, flight logs, planned missions and more. The software helped him demonstrate that flight crews were obeying FAA regulations, as well as WVDOT’s own rules.

“Without a system for tracking our flights, it became evident very quickly that we couldn’t keep up, especially as we began to add pilots,” Long said. “You really need to have your finger on the pulse and know what’s going on statewide so you can answer any questions you get about your operations.”

The digital platform has also helped protect WVDOT’s program. For example, Bennett quickly resolved an investigation after someone mistakenly assumed he didn’t have authorization to fly in an area and reported him to the FAA.

“This is where having a single solution was extremely helpful, because I was able to pull my flight logs and send the investigator my Notice of Authorization for the airspace within minutes of contact,” Bennett said.

At the conclusion of the investigation, which was resolved within 24 hours, the investigator seemed impressed with Bennett’s speed and the professionalism of the documents. He saw that Bennett was operating responsibly, and that he had authorization for his flight. In the end, he told Bennett to keep up the good work. 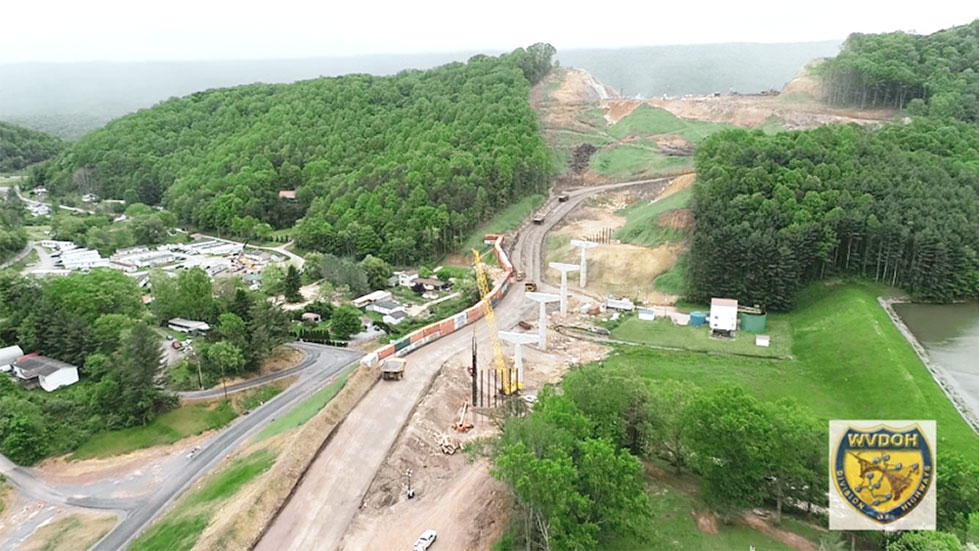 3. Identify a Use Case: Stockpile Surveys

Starting in spring 2019, WVDOT began deploying drone crews for stockpile inspections at scale, hoping to show return on investment very quickly. WVDOT has 177 sites across the state that contain stockpiled materials. Those stockpiles must be physically surveyed annually to calculate the volume of the material.

Conventional stockpile surveys require a worker to physically climb the pile with specialized equipment. This hazardous and time-consuming method was still limited in accuracy. Drones, on the other hand, provide a much safer alternative.

Drone crews can fly a drone around a stockpile and quickly capture extensive imagery. Processing software can stitch the drone images together to build a 3D model of the pile. As a result, drone crews can calculate stockpile volumes with survey-grade accuracy in a fraction of the time, as opposed to the conventional method.

“We would typically have 21 survey crews working on this project, and it would usually take right around 3 weeks during April to complete it,” Long said. “That year when we took it on with the drones, it only took us 7 days to collect this data, process the data and then give back results.”

“We were so impressed with the results,” he added. “Drones make really good models, and they’re more accurate than we would ever have surveyed them. I still would argue with anyone that this is the best way to survey stockpiles.” 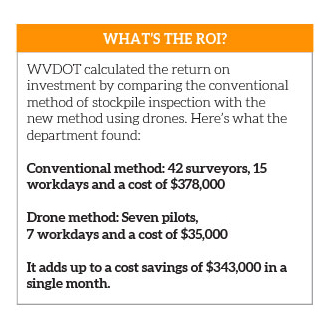 Quantifying Your Return on Investment

WVDOT calculated an accurate return on investment (ROI) by comparing the conventional method of stockpile inspection with the drone method. While the conventional method took 42 surveyors 15 workdays and totaled about $378,000, drones allowed just seven UAS pilots to complete the same workload in 7 workdays at a cost of about $35,000. That adds up to a savings of $343,000 in a single month.

Those savings don’t include intangible benefits, such as higher frequency of surveys, less equipment needed and the ability to reallocate crew members to other projects. And WVDOT is just getting started with drones. As WVDOT enters the “innovate” phase, they’re interested in drone use cases, such as:

Advice for Starting a Drone Program

For DOTs and other entities looking to start a drone program, WVDOT advises the following:

Today, WVDOT is just one of many DOTs benefitting from the use of drones for missions ranging from surveys and inspections to emergency and natural disaster response. If your department is looking for reasons to implement a drone program, saving both time and money are key.

If your department is looking for guidance on launching a drone program, start small, identify one or two strong use cases, and use the ROI to build an argument for scaling up. This, along with a drone management platform, will help set you up for success just as WVDOT experienced.

Sally Huynh is the senior customer marketing manager at Skyward, a Verizon company. Huynh is a professional with a history of delivering successful programs that support company goals for customer acquisition, cross-selling and retention. She also specializes in customer-focused marketing activities that build advocacy and loyalty while creating a world-class experience through the entire customer journey.