Expanding the Capabilities of Wood Construction Through Mass Timber

The cost & sustainability benefits of one of the world's oldest building materials
by Mariah Seaboldt
Tuesday, June 18th, 2019

Wood has long been recognized as a versatile, cost-effective and beautiful building material. While light-frame wood construction is still commonly used across the United States, a new type has emerged as a favorable choice for owners, designers and contractors.

In many ways, mass timber is an innovative building material; however, buildings can utilize mass timber under current building code regulations. In addition, mass timber has been successfully used as the primary construction material for several tall buildings. These pioneering wood structures have illustrated the capabilities of mass timber construction. As a result, building codes are changing and will soon allow mass-timber buildings to reach even greater heights.

The term “mass timber” can refer to a variety of different components, but it’s typically used to describe large wood panels and structural members. As detailed in reThink Wood’s article “Mass Timber in North America,” the following products are considered mass timber: 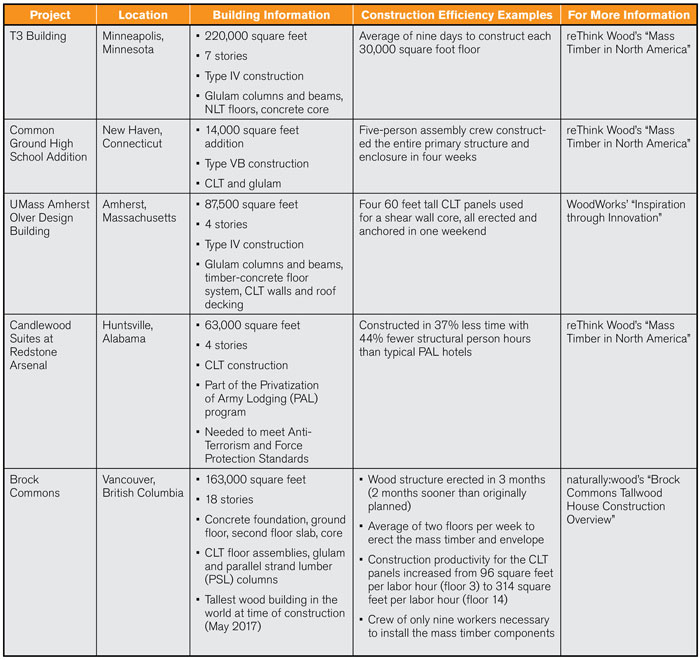 Similarly, the WoodWorks study on the UMass Amherst Olver Design Building recognized that the building would have been six times heavier had it been constructed using concrete. Lighter buildings mean reduced seismic forces and less structural capacity needed in a building’s foundation and other structural elements.

In addition to cost and schedule, sustainability has become a desired objective for many owners and developers. Mass timber buildings often have a lower carbon footprint than comparable steel and concrete buildings. In the case of the Olver Design Building, WoodWorks determined that the 72,467 cubic feet of wood used for the project had a total potential carbon benefit equivalent to removing 535 cars from the road for a year or the energy needed to operate 267 homes for a year.

Similarly, the Canadian Wood Council’s analysis of Brock Commons identified the potential carbon benefit of the CLT and glulam used for the building as equivalent to removing 511 cars from the road for a year or the energy needed to power a single home for 222 years.

Mass timber is also a renewable resource. The U.S. Forest Service (USFS) recently partnered with the U.S. Endowment for Forestry and Communities to develop a grant program to help promote the use of mass timber across the country. The USFS sees sustainably sourced wood as an incentive for promoting forest retention efforts and limit the risk for catastrophic wildfires.

The International Building Code (IBC) is the model code used by various jurisdictions throughout the U.S. While the current versions of the IBC do not have provisions for tall timber structures, timber is allowed in smaller buildings. Currently, wood construction can be used for interior elements in Type III and Type IV construction, as well as for any elements in Type V construction.

As a result of the recognized fire-resistance of large wood members, and the growing number of tested wood assemblies, the 2021 IBC will allow tall mass timber buildings similar to Brock Commons mentioned in Table 1 above.

As a result of the various benefits of mass timber and the upcoming code changes to the IBC, the surge in mass-timber buildings is likely to continue. Combining modern technology with one of the world’s oldest building materials has shown that wood is still capable of extraordinary achievements.

From the development of composite-wood members to the prefabrication of beams, columns and other mass-timber elements, modern wood structures are able to compete with traditional steel and concrete. Consequently, timber structures are reaching new heights and are beginning to change the skylines of cities across North America and beyond.

Mariah Seaboldt is a registered fire-protection engineer in Massachusetts. She is a member of the Architectural Code Consulting team at AKF Group in Boston, Massachusetts, where she specializes in building, fire, life safety and accessibility-code consulting for both existing building renovations and new construction projects. Visit akfgroup.com.

Strategy
A Study in Modular Methods: What Your Peers Are Saying
Dodge Data report shows prefab & modular construction save schedules & benefit budgets
Strategy
How to See Your Company Through the COVID-19 Storm
Guidance for setting clear goals & getting your organization back to work
Strategy
How 2 Leading Contractors Assign Projects Across Teams
Inside McCarthy Building Co & Black & Veatch's project management strategies
Strategy
9 Tips to Maximize Your Company's Profit Potential
How paying attention to the pennies will lead you to success
Strategy
4 Ways to Handle Business Uncertainty
Best practices for managing risk & worry in a fluctuating economic climate