New solutions for consideration on your infrastructure projects
by Julia A. Delligatti
Monday, August 22nd, 2016

Say the word “construction” to a motorist and the reaction you get is almost universal. Construction means orange barrels, caution signs, workers in yellow vests and massive delays. The travel delays and aggravation felt by the public can also lend an unintended consequence to infrastructure projects.

The safety of workers, motorists and the general public is put into jeopardy when construction projects create major changes in traffic flow and patterns.

During peak construction months each year, approximately 20 percent of the nation’s highways and surface roads are under repair. And with nearly 70 percent of America’s roads and bridges in disrepair, this number is steadily increasing. Traffic jams, driver distraction and confusion around construction zones create a dangerous environment for everyone.

Among the most dangerous types of infrastructure projects is bridge rehabilitation or replacement. Due to the limited work space that a bridge structure provides, workers, equipment and motorists are often forced to share a very small area to keep the bridge operational and avoid complete road closure. Lane restrictions on bridges put speeding motorists in close proximity to workers with very little protection for either.

The alternative, of course, is complete closure of the bridge during rehabilitation, which is an unattractive option for most government agencies, local residents, commuters and vacationers. Detours can be confusing to motorists and can potentially cause increased risk of accidents along the new route. In addition, full bridge closures greatly increase the response times of police, fire and Emergency Medical Services (EMS) personnel to the communities they serve.

Even the best traffic control and safety plan may not be enough to prevent jobsite accidents. The reality is that the public’s perception of warning signage and lane closures is negative. In cases where bridge work is happening “under” the bridge—say, the foundation or piers—a more effective solution would be to return the traffic flow to its normal pattern and capacity as quickly as possible. If the traffic lanes above the bridge are untouched by the construction, an engineered shoring solution that can support the bridge structure and maintain traffic flow while work is taking place is ideal. 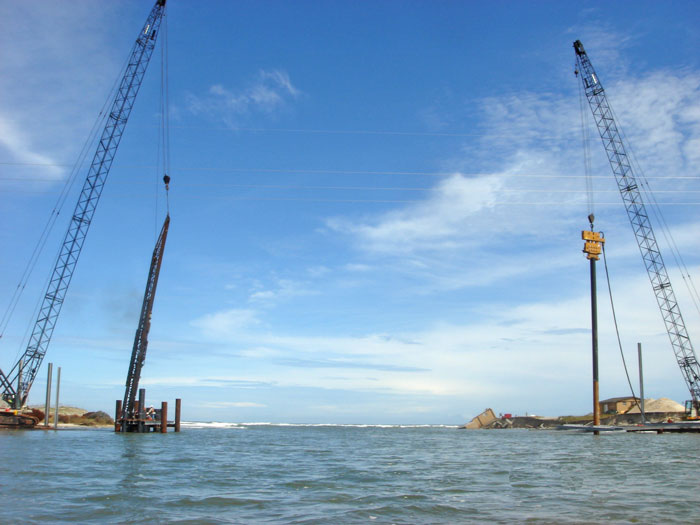 Recently, the I-495 bridge that crosses over the Christina River in Wilmington, Delaware, was discovered to have a set of severely leaning piers. The bridge was immediately closed and its 90,000 daily commuters were forced to find alternate routes. Reopening I-495 quickly was imperative, but safety remained the priority. Rather than compromise public safety and transportation in this critical, East Coast corridor (near the Fourth of July holiday, nonetheless), engineers designed a solution that incorporated heavy-duty shoring towers to support the bridge while the damaged piers could be removed and replaced. The shoring system allowed the state Department of Transportation (DOT) to fully test and reopen the I-495 bridge in a matter of weeks, greatly reducing the impact on commuters and public safety.

In other situations, such as complete bridge replacements or larger-scale rehabilitations, in which single-lane closures and working with live traffic on the bridge are not options, the safety and convenience of maintaining an open roadway may be accomplished using temporary panel bridging. With the aid of a bridging and shoring company and a large inventory of bridge components, a temporary bridge can be erected alongside the original structure in a matter of days, allowing traffic to continue along its normal route while the bridge is repaired or replaced. Once the project is complete, the temporary bridge can simply be removed and shipped back to the supplier. These temporary bridges are fully compliant with American Association of State Highway and Transportation Officials (AASHTO) standards for traffic loads, and comply with all DOT regulations.

Sometimes a bridge project goes from inconvenience to emergency, as is the case for bridges damaged or destroyed by natural disasters like hurricanes and earthquakes. In some areas, entire communities may be cut off from help and supplies when a bridge is destroyed. Fast-responding contractors might consider quick-build panel bridges as a solution. These prefabricated bridges are easy to transport and handle, requiring minimal equipment at the jobsite. They can be assembled with limited manpower and tools, requiring no welding or riveting. The entire bridge assembly is pinned and bolted together, then launched on an innovative roller system that allows the bridge to be pushed out as it is assembled to cross the gap. These bridges have been assembled and launched using small excavators, loaders and even by hand. In one such emergency, on an overseas project, an emergency bridge was even launched across its gap using an elephant. Panel bridges are in service around the world as both temporary and permanent traffic solutions.

When infrastructure projects call for large-scale changes to our roads, highways and bridges, there may be a benefit to thinking outside the box and implementing new solutions to the standard lane closures and detours. Engineered temporary shoring and bridging can bring a new level of safety and convenience to these large-scale projects and get the world moving again.