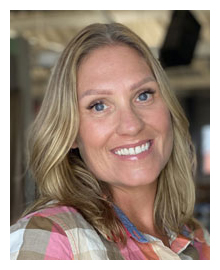 Heather Kurtenbach doesn’t want to forget where she came from. “I came to the Iron Workers Local 86 in 2005. I had recently been released from incarceration. I couldn’t find a job anywhere. No one would hire me,” she said. But her brother-in-law encouraged her to put in an application with the local Iron Workers, and from there, she says it was sink or swim.

“I gave it everything I had on evaluation day. And since then, every day I go out; I work hard; I show up on time,” Kurtenbach said.

Over the 15 years since she joined the trade, she’s gradually moved up the ladder—being promoted to foreman and then general foreman. She then moved to an apprenticeship instructor position. “I told the coordinator I would try it for a month. I found I really loved it, and I never went back to my job in the field,” Kurtenbach said.

For Kurtenbach, her experience moving up in the organization, her work ethic and her position now give her the ability to be a positive tool in one specific area: helping women coming out of incarceration assimilate to life outside the correctional system. She does this through a program called Trades Related Apprentice Coaching (TRAC)—a partnership between the prison system in Washington and unions representing the construction trades (the Carpenters, Iron Workers, Laborers and Cement Masons unions).

The Iron Workers union has language written into its standards that allows Kurtenbach and her colleagues the opportunity to help the TRAC candidates by providing them with boots, helping with union initiation fees, etc., through several 501(c)(3) charities. While incarcerated, Kurtenbach was on a firefighting crew formed in partnership with the Washington Department of Natural Resources (DNR) to combat wildfires. “I believe being sent to prison and working on the DNR crew changed my life,” she said.

Since the start of the pandemic, though, Kurtenbach said her focus has been on helping the union’s members with unemployment. During the shutdowns and delays caused by the spread of the virus in Washington state, many of the iron workers were laid off. “My job right now is pushing and prodding the people at the employment security department to make sure our workers are represented. A lot of them aren’t tech savvy. And now that they are back on the job, they can’t take phone calls when the agency calls them,” Kurtenbach said.

She’s also hard at work communicating and working with legislators to help write and pass labor-friendly laws for workers in the state. It’s this work, Kurtenbach says, that makes her most proud of her career trajectory.

“Iron workers can be rough around the edges. Having the ability to go from working in the field to traveling back and forth to Olympia [Washington] to rub shoulders with Congress—but still being able to connect and relate to iron workers in the field when I’m out on jobsites … that’s huge for me. Now more than ever, it’s important that we are lobbying and voting, and that our voice is heard,” she said.

For women, in particular, she’s looking forward to seeing the industry, especially the trades, become a more inclusive environment in the near future. But she is the first to say that it will require work and effort from everyone in the industry. When asked what specific changes she would like to see in the construction trades, gear was top of mind.

“Women need better PPE. A lot of times when we go to buy a pair of work boots, they don’t even have our size. Contractors are just now starting to come around with smaller, better-fitting PPE for female workers. It would do wonders for retaining talent,” Kurtenbach said. “I also want to see women standing together more and sticking up for each other. Because we are so few, tradeswomen tend to be standoffish. We need to support each other more.”

In the meantime, her advice to women in the industry is to not let anyone get them down. “You will be tested over and over again. There is always work to be done, though, so find the work and do it. Grow a thick skin and keep your great attitude. It will carry you a long way,” she said.

According to Kurtenbach, she’s the living embodiment of putting one foot in front of the other. Though it hasn’t always been easy, she said she places an importance on carrying herself in a manner that says she is capable and can do any task before her. She credits a strong support system at home—her husband in particular—with her determination to continue improving, and is quick to say that without self-care first, she couldn’t be a good business agent or leader in the field. It’s also important to her to keep an open line to women that may need help or advice.

“I would do the same thing for men in a second. The opportunity to help the women in TRAC was just readily available to me,” Kurtenbach said. “We have to help those around us. I will bend over backward for any one of those women as long as they are hungry to grow and doing the right thing.”