WASHINGTON (October 2, 2020)—The construction industry added 26,000 jobs on net in September, according to an Associated Builders and Contractors analysis of data released by the United States Bureau of Labor Statistics. During the last 5 months, the industry has added 689,000 jobs, recovering approximately 64% of the jobs lost since the start of the pandemic.

The construction unemployment rate was 7.1% in September, up 3.9 percentage points from the same time last year. Unemployment across all industries fell from 8.4% in August to 7.9% last month.

“The economic recovery that began in May is losing momentum, as Congress has failed to pass another stimulus bill to offset the continued impacts of the pandemic on travel, tourism, energy production and many other industries,” said ABC Chief Economic Anirban Basu. “With many states still suffering high positivity rates and the economy not fully reopening, combined with the uncertainties of an especially contentious presidential election, elevated financial market volatility and looming winter weather, the near-term outlook will continue to deteriorate absent further stimulus.

“While nonresidential construction employment expanded in September as some projects that had been postponed or interrupted came back to life, the number of jobs gained was rather unimpressive,” said Basu. “In May and June, nonresidential construction added more than 228,000 and 76,000 jobs on net, respectively. But commercial real estate conditions are poor, credit conditions have tightened and state and local government finances have been undermined. Developers and others continue to contemplate the longer-term implications of corporate bankruptcies, recent layoff announcements, remote work and the possibility of a second recession. 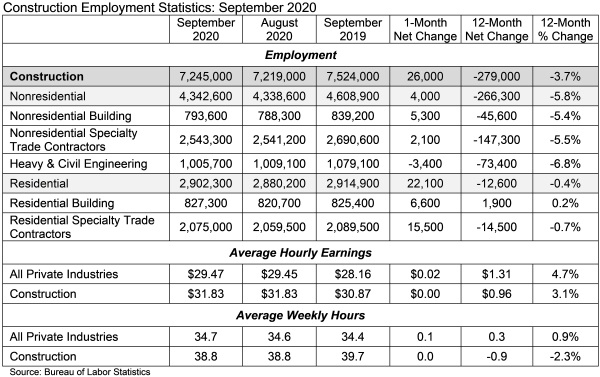 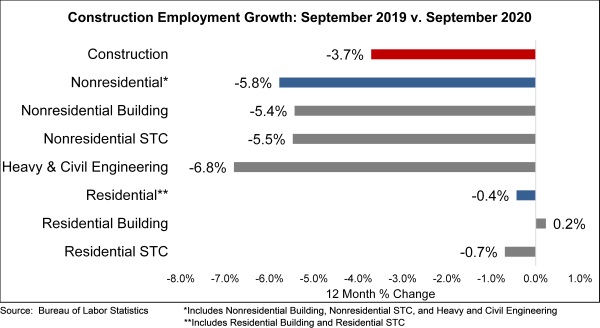