“November construction starts were somewhat of a mixed bag,” said Richard Branch, chief economist for Dodge Data & Analytics. “On the positive side, the gain in nonresidential building starts shows that the recovery from the early months of the pandemic remains on course. If not for the start of a very large bridge and tunnel project in October, nonbuilding starts would actually have posted a tepid gain in November. And despite the November decline in single family starts, tremendous positive momentum remains in the housing sector. There remains significant concern, however, about the ability of construction starts to maintain their current pace in the face of rising COVID-19 cases, the uncertain outlook for additional federal stimulus, and the lack of agreement on funding the federal government past Dec 18. While the near-term outlook for starts remains cloudy, the recent deployment of a vaccine in the U.S. raises hope and expectation that 2021 will be a better year.”

Nonbuilding construction tumbled in November, dropping 14% to a seasonally adjusted annual rate of $191.8 billion. November’s decline was mainly a response to the October start of the $3.6 billion Hampton Roads Bridge and Tunnel project. November’s level of nonbuilding construction starts was actually higher than the monthly dollar value of starts during the July through September period. In November, environmental public works rose 48% while miscellaneous nonbuilding gained 61%. Starts for highways and bridges, however, fell 26% while the utility/gas plant category lost 59%.

The largest nonbuilding project to break ground in November was the $948 million Capline Marathon Pipeline, which is a 632-mile system that extends from Patoka IL to St. James LA. Also starting in November was the $865 million I-275 Howard Frankland Bridge in Tampa Bay, Florida and the $524 million Northwest Water Treatment Facility in Wichita, Kansas.

Through the first 11 months of the year, total nonbuilding starts were down 16% from the same period in 2019. Starts in the highway and bridge category were up 7%, while environmental public works were 6% lower. The miscellaneous nonbuilding category was down 31% on a year-to-date basis, while utility/gas plant category was 45% lower.

Nonresidential building starts moved 19% higher in November to a seasonally adjusted annual rate of $249.7 billion. The commercial sector increased 27% as two large office projects got underway. Gains were also seen in the hotel, warehouse, and parking structures categories. Institutional construction starts increased 17% over the month due to gains in healthcare and education. Manufacturing starts, meanwhile, fell 29% in November.

The largest nonresidential building project to get started in November was the $1.3 billion One Madison Avenue office project in New York, New York. Also starting was the $940 million Richard Boulevard Office Complex in Sacramento, California, and the $615 million Baptist Healthcare Hospital in Pensacola, Florida.

The largest multifamily building to break ground in November was the $175 million Simone Residential Tower in San Diego, California. Also starting in November were the $123 million Scotts Run apartments in Tysons, Virginia, and the $103 million Hanover Wellesley Residential building in Wellesley, Massachusetts. 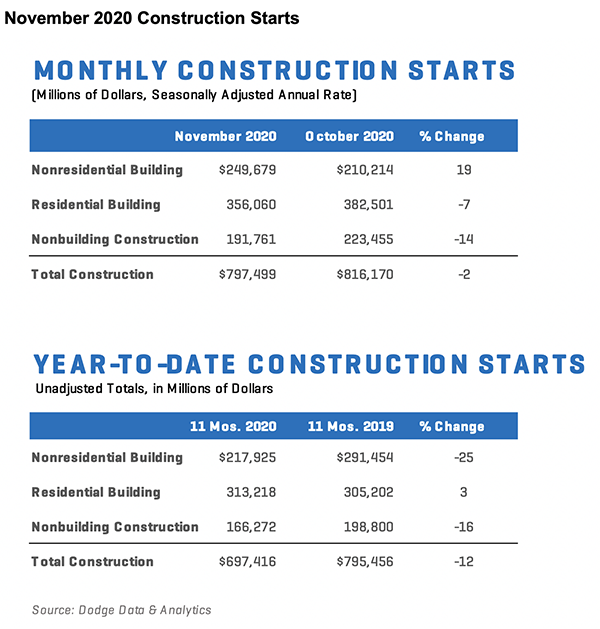 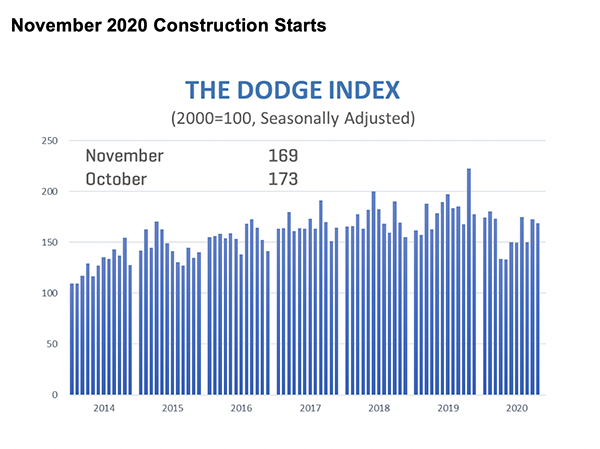