How Hoar Construction Built a Ship in a Bottle

Inside the resurrection of Atlanta's Colony Square & working in a tight city grid
by Michael Ohlson
Tuesday, August 18, 2020

All projects have challenges, but the location and environmental setting of a construction site is perhaps the most influential factor in a project’s complexity. Specifically, working in tight, occupied spaces brings unique conditions that require extensive planning, communication and problem-solving from a project management standpoint.

Consider this—while nearly half of all construction in the United States is expected to take place in the country’s 20 largest cities, it’s estimated that 90% of urban infrastructure projects are over budget or delayed. That statistic highlights how challenging of a work setting the urban landscape can be. The redevelopment of Atlanta, Georgia’s Colony Square, the first mixed-use community in the Southeast, is a prime example of how general contractors can plan for and overcome those types of challenges, while maintaining the schedule and budget.

Located on Peachtree Street in Midtown Atlanta, Colony Square sits between towering skyscrapers and busy sidewalks in the middle of one of the city’s most populous neighborhoods. Every day, the site is exposed to more than 25,000 cars and thousands of residents, visitors, office workers and pedestrians. Because of the dense and populated site conditions, renovating this site was like building a ship in a bottle.

As general contractor, Hoar Construction was tasked with leading a massive overhaul of the 50-year-old property while keeping the site open and operational for current tenants and visitors. This complicated process required tearing down an indoor mall and dated office building to make way for a new theater, food hall and office tower with ground-floor retail.

The extensive demolition, combined with building new structures in the middle of the existing and operating development, made this project one of the more challenging projects the company had worked on in recent years.

Before demolition began, and before any new construction could be started, the team had to reinforce the three-story parking garage on which Colony Square sits. Essentially, the team had to make the building stronger just to tear it down safely. The existing structure was not capable of supporting the weight of the new buildings or the 100-ton crane needed for construction. A total of 275 6-inch micropiles ranging from 15 feet to 60 feet deep were drilled to help support the new structures and the 2,550 tons of steel that were erected throughout the four phases.

Next, 240,000 square feet of buildings had to be demolished before construction could begin, all in the same tight space on Peachtree Street. Because of the legacy structure’s deteriorated condition, the team had to dismantle it—an intricate process requiring surgical-type methods to remove parts piece by piece. In addition, the team had to remove 5,000 cubic yards of concrete from the site. 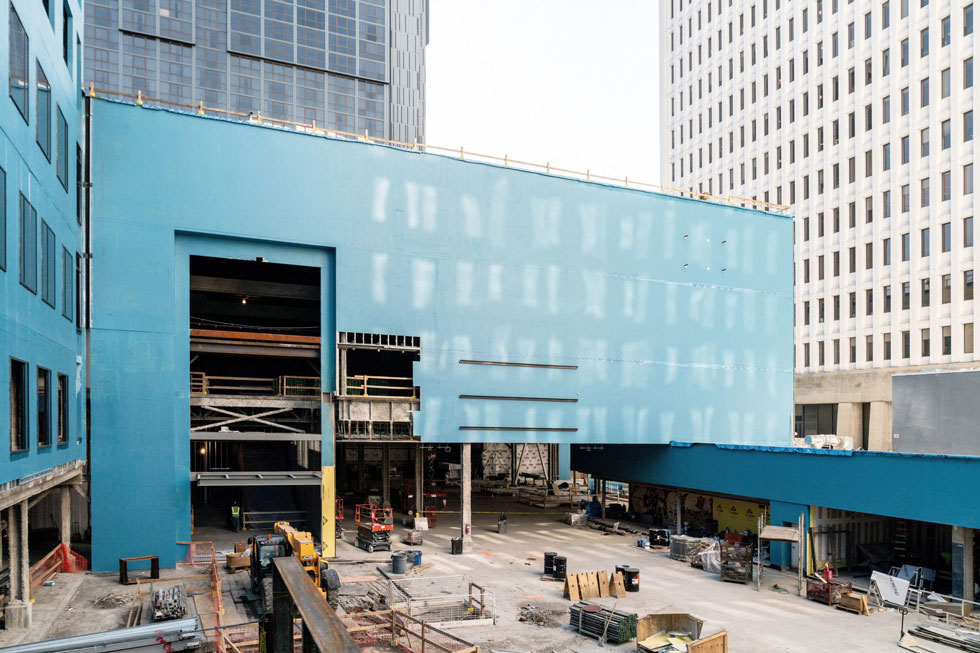 When working alongside functioning businesses and occupied residences, communication is a vital component for ensuring the safety and satisfaction of all parties. One of the main challenges was maintaining constant communication with current tenants to keep them up to speed with what was happening on a daily basis. This required close coordination with Colony Square personnel as well as the tenants that worked in and adjacent to the development.

Hoar also had to communicate clearly with its own team and trade partners. To keep the entire team on the same schedule and ensure logistics ran smoothly, pull planning was incorporated at the beginning of this project. The collaborative process was used to get buy-in from everyone involved. This helped set the stage and ensure everyone was on the same page from the start. In addition, weekly schedule meetings and daily huddles were used to continually coordinate and collaborate throughout construction.

When executing a project of this scale, minimizing disruption for local businesses and people is a priority. One of the tenants of the office building being renovated in the first phase was a television studio. Jackhammers and video recordings don’t mix well, so detailed schedules were created to reduce the noise and disruptions around the station’s scheduled recording times each day. Construction was also scheduled around the lunch rush to accommodate the restaurants that were open and serving throughout the process.

Of course, with a little creative thinking, construction work can be an opportunity as opposed to a disruption. A prime example of this was Hoar’s coordination with a daycare facility whose playground was located next door to the initial demolition site. Instead of normal fencing for the demo site, plywood was brought in and covered with chalkboard paint so the children could draw on it.

A superintendent also took the prekindergarten class on a “field trip” to watch some of the construction through the fence and to talk about building the new school. The ability to be resourceful and nimble is what kept the project running smoothly and prevented major disruptions from arising in what was already a challenging situation.

A key aspect of the Colony Square project was the delicate balancing act of transferring material into and out of the site for installation. As mentioned earlier, the busy site was constantly surrounded by traffic, and limited ports of entry into the tight site posed obvious challenges. If someone brought something out or in at the wrong time, it would create a disruption in the flow of traffic and negatively impact the surrounding community—not to mention delay the team’s own progress. An app, Teamup, was used to coordinate all deliveries for Hoar, its trade partners and the other tenant general contractors working on-site.

Overall, the work at Colony Square generally required more communication outside the site than it did within. No matter how many times a general contractor has worked in urban environments, each project poses a new learning curve that requires out-of-the-box thinking and precise planning. The tight entrance from which materials must flow in and out—or the neck of the bottle—certainly creates additional speed bumps in the path to completion but offers a learning experience in the process of building the “ship” itself.

Colony Square is now a highly activated, urban destination with ample community gathering spaces in the middle of Midtown Atlanta’s vibrant streets. Through efforts involving closely monitored communication, productive problem-solving and extensive preplanning, the project continues to be a success and created a new playbook for how to navigate the complexities of demolition and construction in the midst of these urban bottleneck areas.

Michael Ohlson is a senior superintendent at Hoar Construction and has worked on multiple renovations, including The Parks Mall in Arlington, Texas, the Federal Court House in Roanoke, Virginia, and The Mall at Wellington Green outside West Palm Beach, Florida.