How to Build a Line of Lasting Leadership at Your Company

From apprentice to journeyman carpenter to project manager, all the way to president and owner of a construction company. It’s the kind of story that makes working in an industry like construction worth the potential challenges—one where a graduate degree or connections in high places aren’t the only routes to one day leading a company. Rather, a healthy work ethic and a passion for the job are sometimes all you need to go far in this business.

If you want to one day lead, though, you’ll need to pick up the necessary skills somewhere along the way. For Bill Woolwine Jr., president and owner of Serenus Johnson Construction (SJC), based in Bay City, Michigan, acquiring those skills has been a lifelong process. And the company at which he acquired many of those skills has a long history in the construction industry.

SJC celebrates its centennial anniversary this year. The general contracting company was founded in 1919 by its namesake, Serenus Johnson. Johnson emigrated to the United States in 1912 and, after serving in World War II, returned to the Bay City area to start a family and, later, his construction company.

When Woolwine took over as president in 2014, Tom assumed the role of chief executive officer before retiring in 2018. With the company’s history and its three-generation leadership legacy, the choice of who would lead SJC after Tom stepped down was likely a difficult one for the Johnson family. However, the family found an incumbent president who had, quite literally, worked his way from the ground up in the company.

The Path He Took

It’s this knowledge of all the different roles involved in the construction process that sets Woolwine up to be a better leader. He began working as a cooperative with contractors in high school, and, after earning an associate degree in construction technology and obtaining his state builder’s license, Woolwine was self-employed for 2 years before joining a carpenter’s union.

Since then, his career trajectory has truly been about climbing the ladder. He went from working as a carpenter to becoming a carpenter foreman. Then, he moved into the company’s office as a project manager and estimator. In 2001, Woolwine was named vice president, and moved to his current role as president and owner of the company in 2014.

In 2009, Tom asked Woolwine if he was interested in purchasing the company. Woolwine said he knew SJC was the company he wanted to retire with and didn’t hesitate in saying yes. “It took 5 years of strategic planning before signing an agreement with SJC,” Woolwine said. “I am pleased that I had those years to reflect on what my next role would require.”

Woolwine says his entire career was invaluable in preparing him for his current role. “I’ve always had a passion for construction. From my perspective of learning the trade in the field, working closely with other craftsmen and other subcontractors allows you to appreciate the other talents and efforts [necessary] to complete a construction project,” he said.

“It has been my view that construction will always be a team effort, and to be a part of a team, you need good leadership.” Woolwine reiterates understanding the value of each team member’s role as being imperative to his success as a leader. 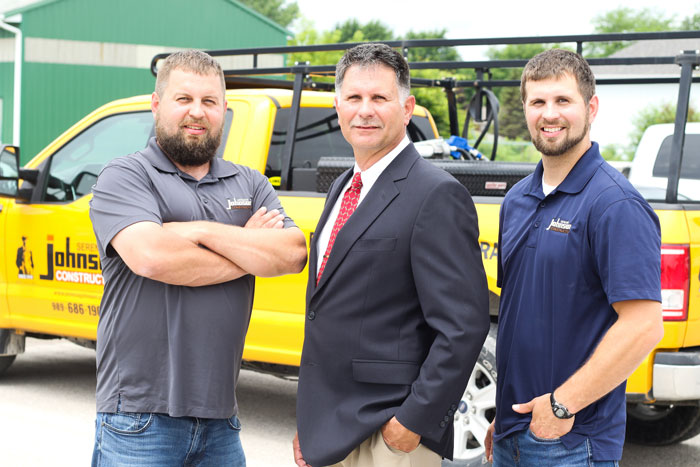 Bill Woolwine Jr. (center) with his sons, Billy Woolwine III (left) and Justin Woolwine (right), both of whom work at Serenus Johnson Construction with their father.

The Company He Leads

From his perspective, Woolwine didn’t expect the jump from vice president to president to be a large one where day-to-day responsibilities were concerned—he was already charged with looking for projects and the oversight of the project management division. However, he learned quickly that, as president, he was also responsible for the future of the company and its success.

“My thoughts turned to focusing on our management team and surrounding myself with great people,” he said. “Our management team has always been strong, but I saw the need to expand to stay aggressive in the competitive market we live in.”

As such, Woolwine’s first move was to promote his oldest son, Billy Woolwine III, to the position of general superintendent in 2015. Billy was previously assistant superintendent and has been employed with SJC for 13 years. In his current role, Billy is tasked with overseeing the company’s equipment and field crews. Woolwine then promoted his son, Justin Woolwine, to carpenter foreman, after Justin completed his 4-year apprenticeship. He has been with SJC for 11 years. Justin is charged with supervising prominent projects for the company.

It was also during this time that Woolwine recognized the need to expand the company’s marketing strategy in order to find new clients and maintain standing customer relationships. He hired Emily Woodruff as assistant project manager and administrative assistant to spearhead the marketing division of SJC. Woolwine brought in Joel Keister to fill the role of vice president in March 2018. Keister has been in the industry since 1996. He is responsible for overseeing the estimating and project management divisions.

The team also divided the estimating and project management division into two separate departments. “I’ve seen great value in making this switch because it allows us to bid more work by freeing up the estimator/project manager role to spend more time in the demanding estimating world,” Woolwine said.

With 100 years of success in the books, SJC has weathered quite a few storms. Woolwine said the lessons he has learned from the company’s past leadership have been some of the driving factors in how he shapes his strategy today. One of those lessons? Stay optimistic. Construction, like anything else, will have highs and lows, and the industry will go through slow periods.

“Patience is a virtue, and if I’ve learned anything over my career, it’s that we are going to have some slow times, but we’ll have good times, too,” Woolwine said. “Raymond told me that you should never overreact in good times or bad times, and that you cannot measure a construction company by one year, but an average of 5 years. Keeping an aggressive spirit is necessary to survive in this industry.”

Woolwine said one of the secrets to SJCs success has been the choice to operate conservatively—whether in good times or bad. On the day he signed the contract to take over the company, Woolwine said Tom’s advice to him was simply, “Make it better.” According to Woolwine, he’s taken Tom’s statement to heart and made a solitary effort to continually improve.

Under his leadership, every employee is expected to be what he refers to as an “ACE”—have a positive attitude, be a good communicator and strive for efficiency. When asked to describe his leadership strategy for the SJC team in particular, Woolwine said much of his success as a leader comes from three practices:

1. Be an encourager—“I’ve seen great dividends come from investing time with individuals to encourage them and enhance their performance. There is value in treating people with respect and how you would want to be treated,” he said.

2. Stay diverse—“SJC has always been a diverse general contractor. My intention is to stay on that path—with our eyes wide open to other opportunities in our region,” Woolwine said.

3. Be intentional—Woolwine said the SJC management team has been charged with intention to be on the lookout for new opportunities in the industry and their own circle of colleagues.

The Advice He Gives

While Woolwine has only been in his current role for 5 years, he has decades of industry experience, including quite a few years heading up a construction team. And over the years, he’s learned a few things about what works and what doesn’t. Here’s his advice for strong leadership in an industry where labor is tight and work is in flux:

1. Efficiency—Woolwine said he and his team see the value of continuous training for the company’s field and office personnel. “It takes a lot of effort to stay current with modern technology, and to stay successful, we cannot fall behind the times,” he said.

2. Lean management—This approach involves running the entire crew with the “intent of continually improving efficiency and quality in all areas.” In the current construction climate and skills shortage, it’s imperative that any team maximizes the talent that is already present or available. “I also work on the Associated General Contractors’ Workforce Development Committee, and it’s always been my desire to … make the younger generation aware of opportunities in the skilled trades,” Woolwine said. He’s also on the local joint apprenticeship and training committee for Carpenters Local 706, Michigan Regional Council of Carpenters and Millwrights, and is involved in the apprenticeship program.

3. Advocacy—Woolwine reiterates the importance of advocating for and hiring apprentices. “We must be intentional about integrating our apprentices with our skilled tradesmen to improve our future workforce,” he said.

Elizabeth Manning is the managing editor of Construction Business Owner.

Marketing
4 Steps to Adapt Your Marketing Strategy in a Fluctuating Economy
How shifting your mindset will make all the difference
Popular Now
Year in Review: Top 10 Articles in 2019
What you missed & what to revisit from last year
Management
How to Be a Better Manager with the 3 Ps of Accountability
Lead by example to help reshape the future of your employees
Management, Workforce Management
How You Should Be Managing the Hispanic Workforce
Why knowledge is power when it comes to culture, communication, compliance & planning
Management, Workforce Management
A Little Bit Ikea, A Little Bit Apple
Finding the leadership sweet spot between too much instruction & not enough