Nearly 30 years after it opened as the State of Illinois Center, the renamed James R. Thompson Center in downtown Chicago remains a marvel to postmodern architecture fans worldwide. But, the glass-enclosed structure also serves as a stark reminder of the dangers of a poorly negotiated commercial construction contract. 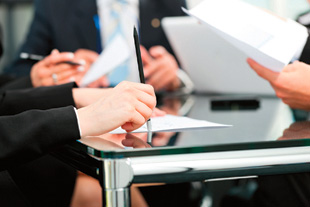 As builders erected the famed structure’s atrium in the 1980s, a dispute arose regarding who was responsible for an expensive scaffolding structure necessary to finish the job. The project’s scope of work did not name specifically who was on the hook. Infighting and delays ensued.

Ultimately, the costly mistake wrecked the general contractor’s bottom line on the project, eating up all of the company’s profits—and then some.

Hammering out the details before breaking ground on commercial construction jobs can prevent similar headaches for general contractors.

Own the schedule
In any complex job, someone’s going to be late with something, and profits erode every hour that workers, equipment and materials sit idle. Additionally, with just-in-time delivery being the goal for everyone, scheduling can be a continuous flashpoint. To get the job done on time and on budget, the general contractor needs flexibility to modify the schedule. It’s imperative that general contractors negotiate for sole and explicit contractual authority to adjust the building schedule.

Define payment terms
Another important area for general contractors to solidify before a project starts is the time frame for payments to subcontractors. Too often, payment terms in construction contracts are vague or nonexistent. Any wiggle room is a potential source of conflict and litigation.

In addition, extra work that is not formally mentioned in the contract is endemic with any big construction project. It is also a persistent point of conflict between owners and general contractors. To avoid payment problems, contractors should confirm extra work orders promptly in writing and submit formal change order requests to the owner. It’s also important for general contractors to understand how extra work is defined legally in their state.

Scrutinize Your Coverage
Commercial construction is a dangerous business. To limit liability, general contractors and subcontractors must purchase insurance policies that protect against the unexpected.

Generally, construction contract negotiations involving insurance should identify who supplies the insurance, who is covered by that insurance and what the scope of the coverage is. Not all insurance policies are created equal. Many offer paltry payouts or demand prohibitively high deductibles. Therefore, general contractors are encouraged to state exact insurance policy requirements in commercial contracts.

They are also advised to read the fine print of their subcontractors’ insurance certificates. Frequently, these certificates provide no coverage details, and they do not indemnify the general contractor.

An increasingly common insurance issue involves design-build delivery systems, in which one firm assumes responsibility for all aspects of the project, even though the designing is completed by an outside entity. Design-build projects typically require general contractors to carry professional liability coverage. These policies protect general contractors if the final designs deviate from the industry standard.

Pick the right referee
On any given day, hundreds of thousands of workers perform complicated, dangerous tasks on jobsites. There are countless opportunities for disputes.

While a well-negotiated, comprehensive contract can prevent most disputes, un-resolvable conflicts do occur. If the two sides require a third party to intervene, alternative dispute resolution is not a panacea.

For commercial construction arbitration, the American Arbitration Association currently charges an upfront administrative fee of $8,700 for claims between $500,000 and $1 million; in contrast, the maximum you’ll pay to file a non-jury lawsuit in Cook County, Ill., for instance, is $337.

There is also a variety of other fees associated with arbitration that parties do not incur with lawsuits. On top of preparation and travel costs, an arbitrator typically charges between $1,500 and $3,000 per day, and you may need to rent a hearing room or other neutral venue. Finally, joinder of all necessary parties in arbitration may be impossible, the resulting award usually cannot be appealed and you may wind up in exactly the place you were trying to avoid: the courtroom.

Raymond Fylstra is a director/shareholder at the law firm of Kubasiak, Fylstra, Thorpe & Rotunno P.C., in Chicago. He concentrates in negotiating construction projects and litigating on behalf of general contractors. Fylstra can be reached at 312-630-9600 or rfylstra@kftrlaw.com.

Law
6 Takeaways from the Online Dispute Mediation Experience
How the pandemic has changed construction litigation & what it will look like in the future
Law
How One State is Enforcing E-Verify & How It Could Affect You
Decoding Pennsylvania's new act & its implications on the entire U.S.
Cavignac & Associates Selected by IIABA as “Best Practices” Agency for 13th Straight Year
Law
What's New With Construction Contract Standards in Massachusetts
The lowdown on one state court case & how it could be interpreted elsewhere
Law
How to Prepare Dispute Resolution Clauses with Your Company's Best Interests in Mind
Advice for handling this legal dilemma when the entire project team is involved