Sometimes the key to significant improvement is simple: Find a new perspective. And sometimes that new perspective is found where you least expect it. For Amye Carle, director of risk management at Hoar Construction, successful risk management comes from outside the industry entirely. According to Carle, risk can be broken down into two parts: the art of collaborating with the entire team and the science to support why any one company should do it.

Carle hasn’t always been in the construction industry, which she said was beneficial in preparing her for her current position at Hoar. She began her career in the legal field, working for both a defense law firm and a plaintiff firm. According to Carle, the job involved a lot of trial and tech support. “I would run all of the evidence for attorneys,” she said. “At the time, I thought I wanted to go to law school, but I had a front-row view of the legal process, and what attracted me more was the problem-solving and risk management involved.”

Her legal experience laid the groundwork for opportunities in risk management, and she soon got the opportunity to move into the field, first with the construction and engineering company BE&K Inc., and then for KBR Inc., an engineering, procurement and construction company. Carle believes her background in the legal field allows her to think differently from the professionals who have spent their careers in construction by giving her the ability to see a project or risk from another point of view, providing clarity and enhancing collaboration.

Even the differences in geographical sites for projects provide new and exciting challenges. There are a multitude of risk areas for each specific project. “We have an executive at Hoar who calls himself a ‘professional firefighter,’ and I love that,” Carle said. “I may walk through the door with a plan in mind for tackling the day’s tasks, but I never know what else will come up.”

The Change Over Time

When Carle first started working in risk management, the role was insurance-driven. And while insurance still plays a sizeable part in her position, it’s certainly not her main focus. “When I got started in risk, I never would have guessed cybersecurity and self-driving cars would be things I would be trying to keep up with on a daily basis,” she said. “Back then, it was really about having an insurance program in place to fall back on when you needed it.”

But, having insurance is simply not enough anymore. Construction is an environment inherently teeming with risk, which is why Carle views working with an insurance team as a partnership, rather than just a backup plan. Recently, she’s seen a major push toward diversified recruitment as well.

The labor shortage is not ending any time soon, and bringing in new (often younger) skilled workers opens the company up to a new spectrum of risk. Carle said she has increased her involvement in local and industrywide programs designed to expose elementary and high-school students to different career opportunities in the trades. According to her, many of these students haven’t considered a career in the trades, so attending these kinds of events has been beneficial on several levels—they are not only helpful to the students in showcasing the variety of job opportunities the industry offers, but also to Carle’s team in understanding and explaining exactly why diversified recruitment is needed and the risk involved in it.

The implementation of new technology allows companies like Hoar to compete for young professionals who are looking for cutting-edge organizations that are open to adaptation. However, the technology must also be accompanied by processes that effectively manage the risk of using a solution. Often, the additional risk is welcome because those solutions allow the team to manage the risk more effectively. “Drones, for one, have enabled us to provide owners and their lenders with better progress reports on their projects,” she said.

Hoar has also placed focus on developing apps internally for better communication. “We work on large jobsites, so being able to get information out quickly is necessary,” Carle said. One of the apps aids in crisis situations. If a worker is injured on a project, for example, the app allows the crisis team the ability to communicate with and update key stakeholders on the situation. The quicker the team is able to get support to that individual, the better chance that the team can keep a lesser incident from becoming severe. Apps like these support strategic planning on jobsites. Carle and her team use the data to lead conversations with the goal of preventing reoccurrence. 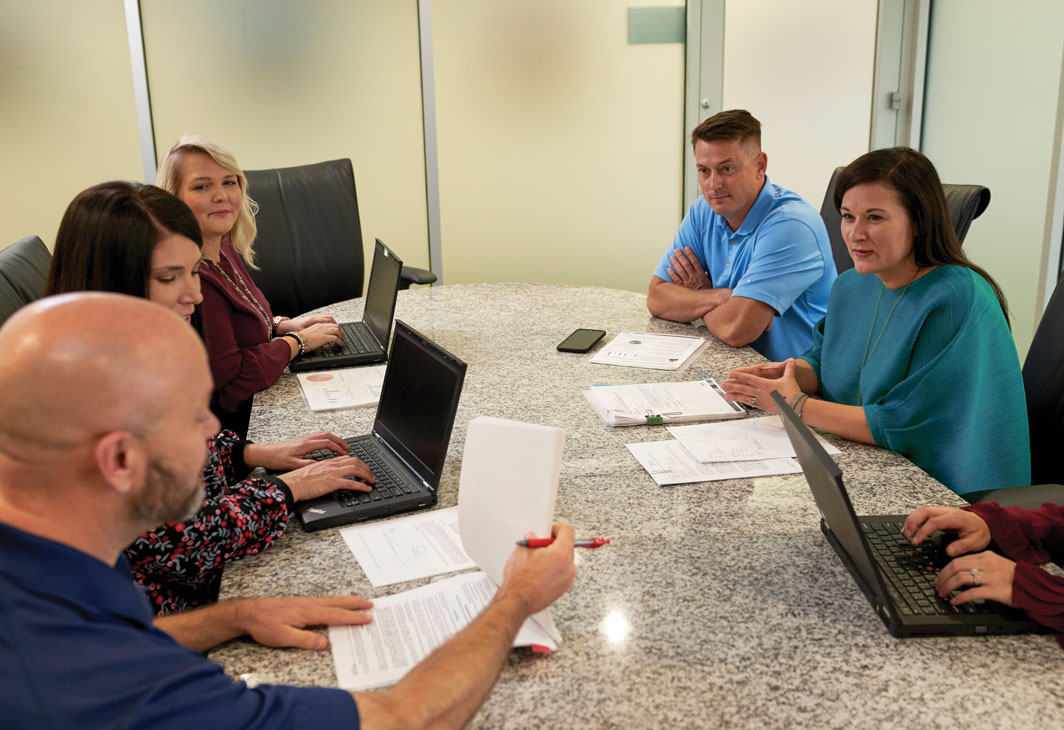 Carle’s role at Hoar continues to evolve, similar to how enterprise risk management (ERM) should. When Carle joined Hoar in 2011, the company’s risk processes were scattered throughout the business. “In some areas, it was difficult to understand the risk processes we had in place,” Carle said. “Don’t get me wrong, we were managing risk very well, but as a risk professional, I could see where Hoar stood to benefit from having a more detailed program.”

So, she set out to accomplish the goal of implementing an ERM program used throughout all divisions of the company. According to Carle, one of the biggest benefits of this approach was that it created the capacity to bring all of the key stakeholders together. “As the risk professional, I am thinking with a completely different mindset than that of a quality control director or a safety professional,” Carle said. “With ERM, you just get a more holistic approach to risk management; and it has been really cool to see our processes evolve over time through this approach.”

According to Carle, Hoar works with a lot of repeat clients, so she and her team often find themselves working through contracts and issues long before the project begins—a method which, from a risk perspective, is a much smarter approach, she said. Negotiating contractual terms ahead of the project allows the team to be proactive, rather than reactive, about potential risk. And working proactively means spending a considerable amount of time collaborating with Hoar’s safety department. “We touch base weekly to find out what is going on across all of our projects,” she said. “We look at warning signs for issues that could become severe risks and work to understand why they are happening and how we can prevent them in the future.”

Carle asserted that the entire team at Hoar is now better at collaborating on a much larger level because of the use of ERM. “With ERM, we’ve managed to have broader conversations with more key players at the table,” she said. “Each team leader will approach a problem differently, and it’s important to consider the benefits of each approach. My team may not always have the best solution to mitigating risk.”

Wondering where the science comes in? Part of running a successful ERM program includes having the right data and analytics to support any proposed changes in processes. That’s where Carle spends a lot of her day—figuring out how to use data to paint an accurate picture for the rest of the team (and for Hoar’s project partners) that explains the potential risk and how to mitigate it. “This is the fun part of what I do. The data allows me to have better, more informed conversations around risk,” Carle said.

It’s important to be specific with the data Carle’s team uses, too. “Looking at construction industry data as a whole, there are some scary trends,” Carle said. “It’s good to have that data as a benchmark, but for us, we need to use data [that is] specific to our company and where it stands in the industry.” The team gathers all of that data and then trends it based on locations and project types. The data is shared with all key stakeholders, including the project team and divisional and executive leadership, with the goal to influence change in their specific areas.

“As such, it’s important that we put the data together in a way that is easy to understand and never overwhelming,” Carle said. “We’ve tried to be creative in how we present the data. For instance, if we are taking on more nighttime work, are we having more issues at night than we are for daytime crews? If we are escalating a schedule, how are we creating more risk for that team? Are certain days riskier than others?”

Herein lies the art of risk management: Not only is it important to build relationships with all key stakeholders, but it’s also important to make sure the data Carle’s team is sending out is immediately useful. Team leaders should be able to take the data and apply it to their projects in real time.

So, what does that data look like exactly? It runs the gamut. For Hoar’s insurance program, data is collected from June 1 to June 1 of each year. The team gathers policy statistics, yearly statistics, Occupational Safety and Health Administration (OSHA) items and trends, and then breaks all of that data down by division. For incidents on the jobsite in particular, this includes number of incidents per month, number of incidents per week, time of day incidents happen, type of projects incidents take place on, which trade partners were involved, and more. The team also looks at industry best practices and tries to apply that data to the company in a project- or division-specific way.

A major part of gathering all this data involves maintaining good relationships with the teams and all those working on the jobsites. “I’m not on the project, so developing strong relationships, in which the safety director, for example, is quick to send me photos and descriptions of jobsite incidents, only helps us create a better overall picture of why injuries may happen and how we can work to prevent them in the future,” Carle said. Anytime an incident occurs on the jobsite, Carle’s team makes it a practice to communicate the incident to Hoar’s company ownership across all divisions within 48 hours.

Carle said it’s important to constantly evolve and adapt. More data and increased collaboration lead to more opportunities to improve. And the biggest mistake you can make is being resistant to change. “We all fall prey to it,” she said. “Our world is evolving, though, and our risk programs should, too.” The more you and your team can embrace change, the better off you will be across your entire company—specifically in identifying and mitigating potential risk.

In the industry’s current climate, there is much talk concerning delivering projects faster, with less money and fewer people, putting pressure not only on the risk management team, but on everyone involved with the project. “This makes it all the more important that we break down those barriers and trust each other more,” Carle said. “Everyone may have different priorities, but we all have the same goal.”

Insurance
Insurance Update: Q4 2021
8 tips for managing risk amid fluctuating market conditions
Insurance
Who Assumes Responsibility for an Injured Worker?
How to navigate subcontracting & workers’ compensation issues in the construction industry
Insurance
An Examination of the Construction Underwriter's Outlook
How to work with your surety partner to keep communication open & efficient
Insurance
The 6 Rules of Risk Mitigation in Construction Contracts
Exploring the hidden issues sinking your profits
Insurance
Workers' Compensation 101 for Construction Firms
4 steps to keep claims from derailing your company & its processes