The Importance of Inspections & Fleet Maintenance

How preventive audits of your equipment’s safety points can help to reduce accidents
by Larry Collier
Tuesday, March 20th, 2018

Recently, a crew working a “tilt-up” job in Austin, Texas, got a frightening reminder of how important regular crane maintenance and equipment inspections can be after an accident on the jobsite. (You can watch live video of the accident at youtube.com/watch?v=Mn6PYOG6sWw.)

In any accident situation, there are a number of things that could go wrong with the equipment. In this case, maybe the lattice boom truck crane was too small for the job. Maybe its outriggers weren’t extended far enough to support the pick. Or maybe there was a defect with the rigging. A defect at a hoist point or a strap failure at the shackle may also have been to blame. It’s too soon to say for sure what caused the accident, but below are a few observations that could have signaled a red flag to the teams on the jobsite.

The accident certainly could have been a lot worse. According to the man at the site who filmed the video, the only injury incurred was one broken ankle. Of course, it’s too early to say exactly what caused the accident, but the potential mistakes and equipment failures mentioned here are exactly the sort of issues that make a construction site dangerous. In fact, mobile crane accidents typically result from one of the following two factors: operator error and incorrect crane setup. 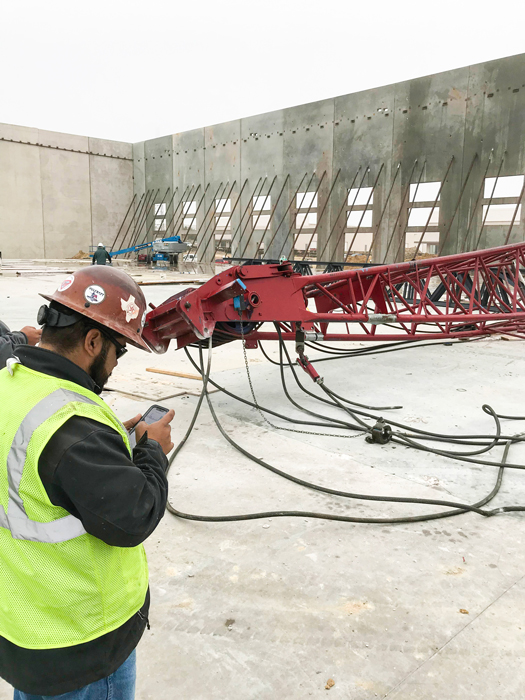 Now that we’ve looked at what can go wrong at the jobsite, let’s look at some preventive measures to take before the lift even begins. It’s important for fleet managers and contractors who operate cranes and other equipment to use a regular maintenance schedule. If they follow the maintenance section in the operator’s manual for each crane, they will be in good shape. Real problems can arise when they don’t.

“They can’t just run the cranes until something breaks, and then worry about it,” said Woodruff. For example, regular maintenance means checking lattice work to make sure there are no weak spots, checking all the fluids and keeping all the filters changed. “If a contractor doesn’t know how to do the preventive maintenance, one of our guys can go through it with them,” said Woodruff.

In addition to following a maintenance schedule, prelift inspections are also critical. Even experienced crews may have inadvertently pushed a crane beyond its limits, damaging key components and parts in the process. Annual inspections may be required to ensure all components are working properly, depending on the crane and where you work. Still, a prelift inspection before every job will mitigate risk as well.

“If the problem [that caused the accident in Austin] was with the rigging and not the crane, there may have been something wrong with the chain that led to the accident,” said Woodruff. “A proper inspection might have caught a weak spot in the chain, for example.”

Although crane owners generally come to them when there’s a problem with the electrical system or some other repair is needed, crane service providers can help companies when they add a new crane or other equipment to their fleet and aren’t sure how to inspect it and establish a maintenance schedule.
Woodruff’s advice for someone buying a used crane? “Make sure you get the crane inspected. That’s No. 1. If you’re going to pay a couple hundred thousand dollars for a piece of equipment, you need to make sure it works.”

The next most important safety objective is to make sure you have the correct load capacity for the work you’ll be doing. Make sure the used crane you buy is rated at the capacity that you need to do your next job.

“It’s hard to forecast what job somebody may call you for in the future,” said Woodruff. “But you can look at your project history and know what kind of loads and picks you made and decide what kind of capacity you need.”