New Yorkers paused quietly at 8:46 and 9:03 a.m. and steel workers waited. The names of nearly 3,000 victims were read aloud and machines sat silent. By late morning on September 11, most of this year’s observances for the anniversary of the 9/11 terror attacks had concluded in lower Manhattan.

Soon after, three JLG 1850SJ Ultra Booms were fully extended to 185 feet and steel workers resumed their task of rebuilding the World Trade Center site that was devastated more than a decade earlier. The boom lifts are not the only machines to work on this historic site—just the latest. The company's American-built boom lifts and scissor lifts have been working on the rebirth of this landmark site since the Freedom Tower first began taking shape in 2007. 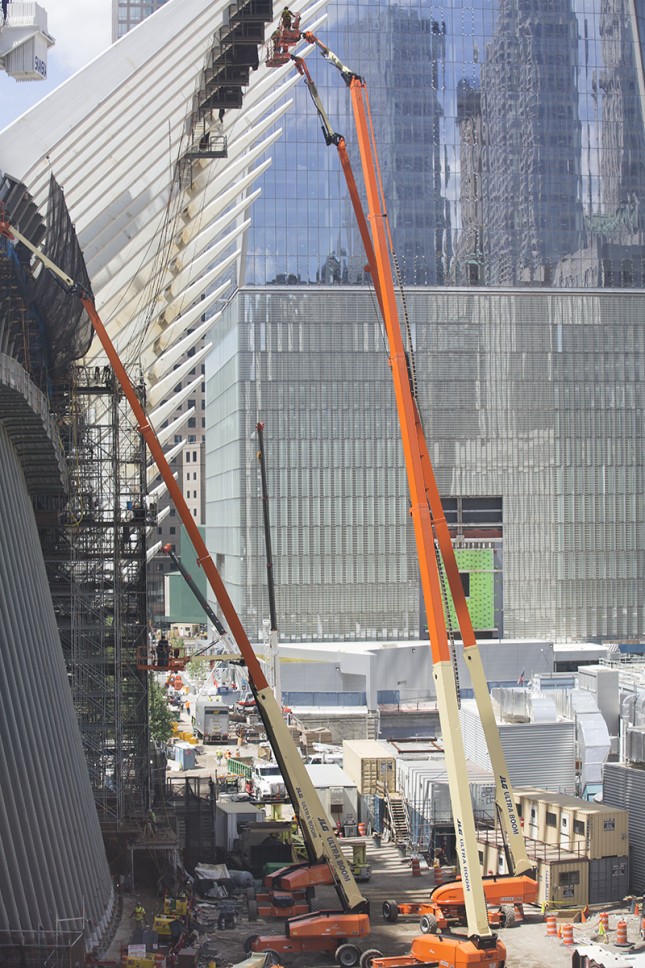 The Road to Recovery

The locations of the 9/11 terror attacks in Shanksville, Pennsylvania, Washington, D.C., and New York City have, for many, become hallowed ground. But New York’s site was and is different. The size and scope of the disaster made it so. This difference has made rebuilding the World Trade Center (WTC) structures a challenge unlike any other. The idea of rebuilding on the site offended some, while others viewed it as a means of healing. The reconstruction timeline was further complicated by joint ownerships, leasing partners and government intervention.

Thirteen years later, many of the buildings are open or are opening soon, but the 16-acre complex is far from complete. Today, steel workers are using the 1850SJ booms to erect the 114 spikes that adorn the top of the “Oculus,” the above-ground portion of the site’s transportation hub.

Skanska won the $204 million contract to build the hub from the Port Authority of New York and New Jersey in 2011. Skanska Koch, an operating unit of Skanska USA Civil, is doing the actual construction. Designed by internationally acclaimed architect Santiago Calatrava, the building features a distinctive, wing-like appearance.

Calatrava’s original soaring spike design has been scaled back because of security issues. The design was further modified to eliminate the opening and closing roof mechanism because of budget and space constraints. While the 1850SJ units work above the roofline, other JLG booms work on the façade and other internal and external features in a rush to complete the 330-foot-long building that is 2 years and nearly $2 billion over budget.

The transportation hub, located between WTC towers 2 and 3, is bounded by Greenwich, Fulton and Church streets. It comprises a train station with a large and open mezzanine under the National September 11 Memorial plaza. When completed, the station will connect the New Jersey’s PATH train system to 11 lines in New York City’s subway system, the Battery Park City Ferry terminal and several buildings in the WTC complex. It will serve more than 200,000 commuters and thousands of tourists and visitors who travel daily to lower Manhattan.

The hub encompasses 800,000 square feet under one roof—nearly the same square footage as New York’s famed Grand Central Station. It will feature retail shopping and restaurants. On completion, the structure will have consumed more than 22,000 tons of specially designed structural steel. The site is now scheduled to open on December 17, 2015.

Reaching Out from the Ashes

From the beginning, boom lifts have been an integral part of the resurrection of virtually every part of the WTC complex, including the memorial, the museum and the new WTC buildings. The most visible of the office buildings is the Freedom Tower, now called One World Trade Center. The 104-story tower is located just north of the original North Tower (1 World Trade Center), where the original 6 WTC building once stood.

The $3.9 billion skyscraper, designed by David Childs of Skidmore, Owings & Merrill, officially rises to 1,776 feet, making it the tallest building in the United States. Scheduled to open this November, the tower offers about 3 million square feet of retail and office space. A three-level public observation deck that spans floors 100 to 102 (approximately 1,250 feet up) is scheduled to open sometime next year. The original World Trade Center twin towers, which opened on April 4, 1973, had an indoor observatory on the 107th floor (at 1,310 feet) of the South tower.

Lifts have also contributed to the construction of the Richard Rogers-designed 3 World Trade Center and the Fumihiko Maki-designed 4 World Trade Center. Tower 3, currently just seven stories tall, will rise to 80 stories and have a roof height of 1,155 feet. Tower 4 (150 Greenwich Street) was the first building to open in the new WTC complex. It is 72 stories tall, reaching 977 feet.

Erecting buildings on such an important and highly scrutinized site is immensely challenging at best. The public reception of the structures has varied widely. Regardless of perceived aesthetics, the business of rebuilding the World Trade Center complex is critical to helping America move into the future without ever forgetting its past.