Inside American Construction: The USS Constellation

How equipment played a critical role in the restoration & repair of this historic warship
Thursday, July 21st, 2016

Visitors who tour the United States Sloop of War Constellation (USS Constellation) in Baltimore, Maryland’s Inner Harbor get an close look at the last existing Civil War era naval vessel and the last sail-powered warship built by the U.S. Navy. What they do not see is all the behind-the-scenes work that goes into restoring, repairing and maintaining the National Historic Landmark—work that Tim Padden, district sales manager at United Rentals in Baltimore, which supplied the equipment used on the project, recently described as “a historic dance of men and machines.”

Launched from the Gosport Naval Yard, Norfolk, Virginia, in 1854, the USS Constellation was assigned to interdict the slave trade off the coast of Africa, just prior to the U.S. Civil War. One hundred years and multiple missions later, the warship was decommissioned in 1955 and taken home to its permanent berth in Baltimore Harbor. Since then, the vessel has undergone a number of repairs and restorations, including recent work on the spars (the three top masts and three t’gallant masts) and the ship’s rigging (the ropes, cables, and chains that support the ship’s masts). 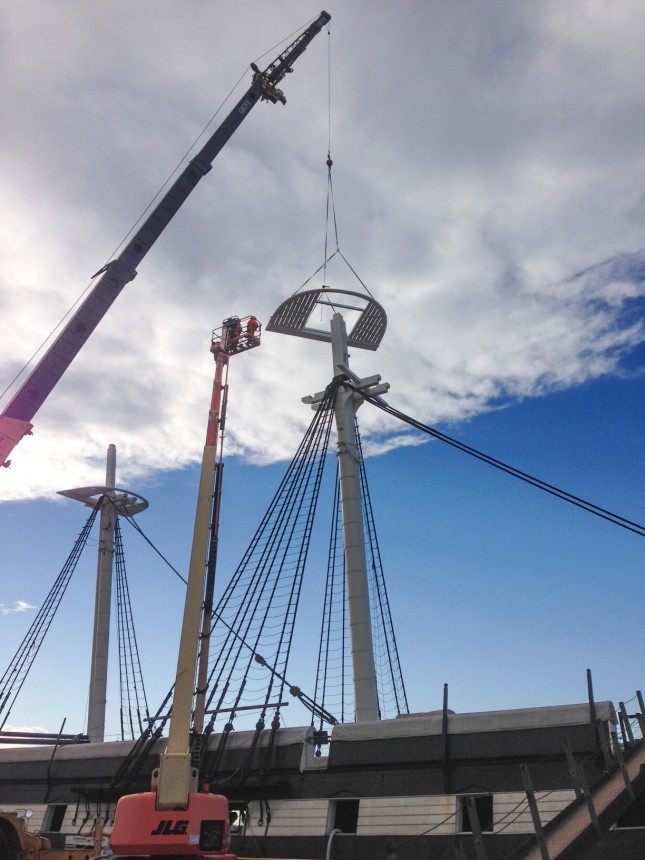 This work in the upper reaches of the ship actually began in October 2014, when the spars and rigging were removed in Cianbro’s Baltimore Yard. The ship was then put in dry dock at the U.S. Coast Guard ship yard, so that 4,500 square feet of planking beneath the water line could be repaired or replaced. Work on the hull was completed, and the ship was returned to Inner Harbor in February 2015, minus its spars and rigging. Repairs to these elements were completed throughout the spring and summer. At the end of the summer, as tourist season drew to a close, the ship returned to Cianbro’s Yard, where the work of reattaching the spars and rigging began, under the watchful eye of Chris Rowsom, executive director of Historic Ships in Baltimore and the vice president of Living Classrooms Foundation.

Integral to the project were two pieces of equipment from JLG Industries Inc., provided by United Rentals—a G6-42A telehandler and a 1500SJ boom lift. The telehandler played a key role moving materials from the upper to the lower yard as the assembly project began.

“It’s amazing what you can do when you have the right equipment,” said Rowsom. “Remember, the ship is about 179 feet long, and the spars weigh anywhere from 850 to 4,500 pounds. The telehandler provided the material handling and logistics capabilities we needed to move the spars and all the related parts, allowing us to position them for the crane that eventually hoisted them.”

The telehandler offers a lift capacity of 6,600 pounds and a maximum lift height of 42 feet 1 inch. All-wheel steering and single joystick controls contributed to smooth operation and maneuverability at Cianbro’s Yard, and multiple attachments provided the versatility necessary to move the various components of the spars and rigging. “As the telehandler moved parts and accessories from the upper to the lower yard, it really lived up to its nickname as a ‘pick-and-place’ machine, maneuvering around objects to place ship components precisely where they needed to be,” said Padden.

Equally important to the task at hand, the boom lift provided much-needed support when it came time to guide the spars into place and hang the rigging. “Its 150-foot platform height, telescoping jib and rotating basket made it a versatile machine, allowing us to get into some tight spaces when we needed to and be close to the job at hand,” said Rowsom. “That was helped by the fact that the boom lift was so easy to operate.

“It’s true that Cianbro supplied an 80-ton crane for our use,” he continued. “But a crane can only do so much. With the boom lift, operators in the basket were able to receive the components from the crane and assemble them, guiding the spars into place, making the necessary connections, and hanging the rigging.” Taking place high above the deck of the ship, this is what Padden described as the “dance of men and machines.”

With the help of the boom lift, work on the spars and rigging was completed, and in December 2015, the ship was once again returned to its berth in Inner Harbor. There, it continues to welcome visitors, who tour the ship and participate in hands-on learning experiences. Living Classrooms shipboard education programs take place aboard the USS Constellation, as well as the USCG Cutter Taney, Submarine Torsk, Lightship Chesapeake, and the Seven Foot Knoll Lighthouse.

“These are wonderful programs that teach participants about the lives of sailors who served aboard these ships, long before they had boom lifts and the many conveniences we take for granted today,” said Rowsom. “But we certainly can’t forget about those boom lifts, because as work on the USS Constellation demonstrates, the lifts have played a critical role in enabling us to continue to use this vessel as a way to bring American history to life for thousands of interested visitors each year.”

Technology
Is Tech Adoption Worth the Pain?
2 key shifts in tech implementation & why they matter
Safety
Your Guide to Preventing Jobsite Falls
3 steps to develop a workplace program & improve safety
Fleet Management
6 Best Practices for Reducing Fleet & Operations Costs
Why you shouldn't ignore the potential savings your equipment could bring you
AIA Releases Nonresidential Consensus Forecast
Risk Management
4 Trends in Construction Risk to Watch in 2020
How you can best prepare for the potential challenges that lay ahead