Finding the Right Generator for a Construction Jobsite

It's easy to feel left in the dark when selecting a generator for a jobsite. Many people feel "powerless" to make the right decision when faced with the many choices available.

Each jobsite will dictate the load size and type of generator that would work best, so every jobsite must be evaluated individually. The challenge comes in identifying those needs and matching them to a generator with similar capabilities. Overcoming that challenge will place you and your crew in a position of "power" at all times.

When looking for a generator, there are more numbers to crunch beforehand than simply checking the budget and some price tags. However, the physical size of a jobsite is not so much a factor, because a smaller jobsite may require more power tools than a larger site.

When considering a generator's use, think through what tools you will need or want to run off the generator. Begin by listing what the generator should power, such as circular saws and a welder. Find the silver tag attached to each tool to check the wattage, then write that number on the list and multiply it by the number of units to be used. As an example, two hand drills that use 600 watts each would need 1,200 watts of power to run both.

Some tools take more energy to start than they do to run. This surge of wattage also should be taken into account when determining the total power needed. For example, hand drills and electric welders run on a constant wattage, while circular saws and air compressors need greater energy to start.

To allow for error or future power requirements, contractors may want to add 10 percent to the total they have calculated. In the above example, the total would then indicate that a generator that can handle 8,800 watts-or 8.8 kilowatts-would be needed.

Some tools may have power listed in amps and volts, rather than watts, and horsepower might be used for motor-driven equipment. Some relatively simple calculations will convert these numbers into watts. If volts and amps are listed on the appliance, multiply the two to determine the wattage: amps x volts = watts. When horsepower is listed, keep in mind that 1 hp equals 746 watts. As a result, a 1/8-hp motor will draw 93 watts, 1/4 hp equals 186 watts, 1/3 hp equals 249 watts 1/2 hp equals 373 watts, 3/4 hp equals 560 watts and so on. Keep in mind that motors may need up to four times as much power to start as they do to run. Speak with an equipment dealer in order to get the exact specifications for a particular motor.

With a list of tools and wattages in hand, it's time to travel to the next stop on this "power trip".

Shhh! Do You Hear It?

Technology advancements have made generators quieter and cleaner than ever, but there are still several degrees of "quiet" and "clean" -and the quieter the model, the more it will likely cost.

Inverter generators offer extremely quiet, clean power, which would be especially suited for sensitive electronics. The power runs through an inverter board, producing purely manufactured power. Inverter technology may be the right fit for a job if it's in a severely noise-restricted area where the resonance from a standard generator may be problematic.

Quality components aimed at reducing noise can lower the decibel level of conventional generators. Look for large mufflers, air cleaners built to suppress noise and automatic idle control, which will slow the engine when power isn't being drawn.

When it comes to "clean" power, conventional generators use automated voltage, with a regulator controlling the voltage level and thus keeping the power more stable, or "clean." Sensitive electronics run best on clean power since voltage fluctuations can cause computers to reboot or affect components that will later need to be recalibrated. For construction sites, however, look to using a capacitor-style generator. The power level is sufficient for power tools and air compressors, even though it would not be recommended for powering electronics.

A quality generator needs to hold up to the demands of a jobsite. A number of components indicate a well-built machine. First, a quality generator needs a quality engine-it won't matter how well the rest of the generator has been constructed if the engine isn't sound. Look for a company with a strong reputation for engine and generator reliability and a solid warranty program. Furthermore, a fuel-efficient engine will cost less to run and prevent frequent refueling and downtime. A generator with automatic idle control will conserve even more fuel since the engine will lower to an idle when power is not being drawn from the system.

A quality generator also needs to be made with quality components. Check the thickness of the steel construction, as well as the durability of the fuel tank. Look for well-built starting components-either an easy-to-pull recoil starter or an electric start. Count the outlets-will there be enough to power everything adequately?

An expansive control panel will indicate a better quality machine. Look for an hour meter to help keep track of maintenance checks and services and a voltage meter will eliminate guesswork. Using a generator with the largest fuel tank available for its size will lessen time spent refueling, while finding a generator with a fuel tank gauge will simplify checking the fullness of the tank. Additionally, a low-oil shutdown will guard against letting the lubrication level drop too low, which may result in engine damage.

Although it's a minor component, a lifting eye may be worth its weight many times over since it allows the generator to be hoisted by a crane at the end of the day to prevent late-night theft.

While it may not be the first thing to come to mind when looking for a generator, it is also important to ask whether it is compliant with Occupational Safety and Health Administration (OSHA) and Environmental Protection Agency (EPA) regulations. The EPA has established three levels for emission control standards-Tier I, II and III-with deadlines for each tier of increased standards to be reached. OSHA sets regulations for ground fault circuit interrupters (GFCI) receptacles. GFCIs will help protect operators from electrocution when used on a generator with a frame that can serve as a grounding electrode. The GFCI will compare the amount of current going to electrical equipment with the amount of current returning along the "grounded neutral." If the difference between the two streams of current exceeds 5 milliamps, the GFCI will trip and stop the current. While the GFCI will not protect against short circuits and overloads, conventional generators will pop a circuit breaker when it becomes overloaded, killing the outflow on the receptacle. On an inverter generator, a digital display will show "overload" and the engine will stop. The generator would need to be shut down and reset once the load was lessened.

With that, the bulk of the "power trip" has come to an end. The lessons learned at each stop should offer a guide through the steps to finding a generator that's a perfect fit for your jobsites.

With this map in hand, feel free to proceed to the final destination and contact an appropriate manufacturer or visit a local hardware store or rental center. Complete the trip empowered by the knowledge of how to find the right size and type of generator to meet your needs. 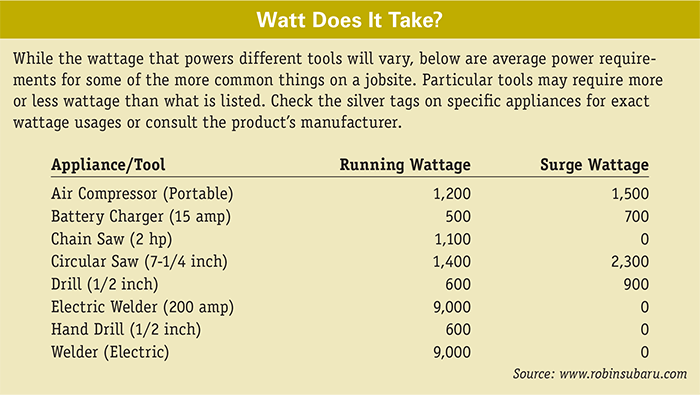