The CFMA Annual Conference and Exhibition

To say that the Construction Financial Management Association (CFMA) community is strong is an understatement. This group is like a large extended family that is always willing to embrace new members. Every year I attend the CFMA Annual Conference, I’m reminded of how much it fosters networking. According to CFMA’s CEO, Stuart Binstock, more than 1,100 people attended this year’s conference, held June 22 through 26 in San Diego. Among this group are contractors, CPAs, risk management professionals and other consultants to the industry.

The association works hard to incorporate networking opportunities. For instance, this year for the first time, CFMA offered small- and medium-sized construction firm roundtable sessions after realizing the success of the large-firm CFO roundtables last year. During these two-hour roundtables, attendees listened to short presentations that prompted topics of discussion. The most-discussed subjects at the large-firm roundtables were impending healthcare reform, ways to incentivize employees and special concerns for contractors working out of state. “We had about 350 people show up at 7 a.m. to share best practices and networking in all of the roundtable sessions,” Binstock says. “If we didn’t know it already, that was one of the key indicators that our members really enjoyed interacting with one another.” 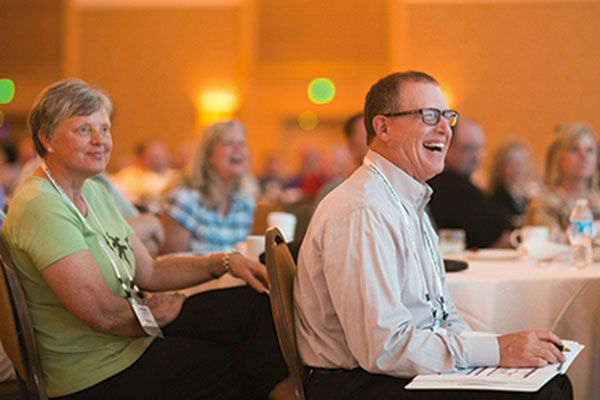 Another new feature of this year’s conference were the technology forums. The forums, which were hosted by construction software companies, functioned like mini user conferences for current customers and were held before the conference started. According to Binstock, the decision to include these events was multipurpose; they offered another value to members who might not ordinarily attend a user conference and provided a way for the association to give back to the software companies who have been major supporters of CFMA.

Giving back is a theme that ran throughout the conference. “Last year for the first time we had a fun run for charity,” Binstock says. “We felt like it was important for CFMA to give back to the local community, so we will do this every year.” This year, CFMA’s fun run raised $5,000 for a hospital in San Diego.

Being in sunny San Diego certainly helped boost the attendance of the conference, which was up 15 percent from last year. However, the big draws (besides networking) are the informative sessions. A regular speaker at the conference, Anirban Basu, CFMA’s economic advisor, provided a lively and entertaining outlook on the economy in “Going up for the Rebound” to a packed room. “We affectionately call Anirban the rock star of the economists,” Binstock says. In his outlook, Basu focused on the correlation between the global economy and growth in nonresidential construction. He noted that the global economy is currently “bathed in mediocrity” and observed that in the U.S., capital is flowing to financial markets but is not yet being deployed. As for the labor market, Basu described it as “not terrible,” adding that on average the quality of jobs being added is poor. He explained that most of the construction jobs added are in specialty trade contractor segments and tied to residential construction, whereas recovery in nonresidential construction continues to be sporadic. The bottom line: “moderate growth ahead.”

Another popular session at the conference was “Fraud in Construction Companies: Lessons from the Trenches” by Angela Morelock, partner at BKD LLP. She shared interesting cases she has uncovered in her 18 years of working in forensic accounting. Morelock noted that contractors should pay special attention to vendor-related schemes. “We often don’t do that great of a job identifying subtle clues of fraud,” Morelock said. She stressed that lifestyle clues such as employees who suddenly begin purchasing lavish cars and vacations are often the best—and most overlooked—signs of misconduct. Morelock also shared some disturbing statistics: According to the 2012 Global Fraud Study by the Association of Certified Fraud Examiners, the cost of fraud in 2012 was $2.9 trillion worldwide, and almost half of the companies involved recover nothing after fraud is discovered.

At other sessions, attendees learned about integrating new technology into their operations. Many attendees cited “The Technology Tool Kit that Will Keep Expenses Low and Revenue High” by James Benham, president and CEO of JB Knowledge Technologies, as a top-rated session. Benham provided a history of collaborative technologies and shared ways contractors can begin using free apps such as Dropbox and YouSendIt as well as construction-specific tools like TeklaBIMsight and Trimble SketchUp.

In addition to technology topics, other sessions were divided into tracks that included benefits and human resources, leadership and management, heavy/highway, sub-specialty, and accounting and finance.
Aside from the conference, CFMA provides other essential resources for contractors. For instance, they now offer their financial benchmarker as an online product. “We have 22 ratios that we can measure on the benchmarker,” Binstock says. “It’s very useful to measure yourself against similar-size companies in the same region doing the same kind of work.” In addition, CFMA offers CCIFP certification courses. “We get inquiries all the time from members who will call up and say, ‘Can you give me all the CCIFPs in a state, because I’m looking to hire somebody?’” Binstock says. This program is going through the ANSI certification process right now with plans to complete the process by next year.

CFMA’s strategic plan is focused on providing members with more value, not increasing member growth. Binstock and his staff believe that growth comes organically through providing opportunities for members to gain valuable and actionable knowledge and to foster connections. He had this to say about attendees’ response to this year’s conference: “We are dealing with accountants, and a number of people said, ‘I divided what it cost me to go by the number of CPEs that I received, and the dollar per CPE was a great value.’ … That’s a real accolade for us.”

Jeana Durst is the editor of Construction Business Owner.