Learn how the new contractor-subcontractor agreement could improve business
By: Peter Noone 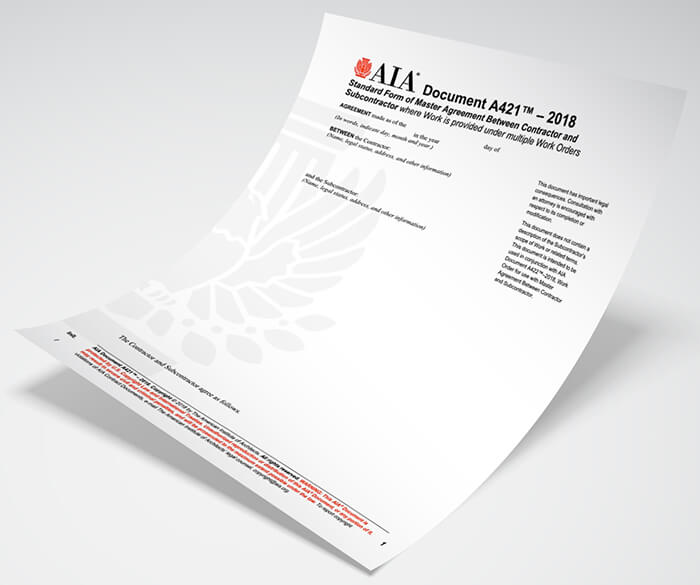 This fall, the American Institute of Architects (AIA) will release the final addition to its suite of Master Agreements: the A421-2018 Standard Form of Master Agreement Between Contractor and Subcontractor where Work is provided under multiple Work Orders. It is written for contractors who will hire the same subcontractor for many projects involving the same or different owner(s). The new A421 Master Agreement contains the common contract terms and conditions, such as dispute resolution, insurance, and payments, that will apply to each Work Order. After executing an A421, contractors can issue scopes of work for multiple projects to their subcontractors without negotiating the governing terms and conditions of the agreement for each project.

Another feature of the A421 is that it incorporates the Prime Contract. The result is that the terms and conditions to which the owner and contractor agreed in the Prime Contract “flow down” to the contractor and subcontractor. The A421 also sets out the parties’ mutual rights and responsibilities. When there is a conflict between provisions in the Master Agreement and a Work Order, the terms of the Work Order govern. As with most AIA Documents, terms not defined in the Master Agreement or Work Order are as defined in the A201-2017.

Other contractor-owner specific documents included in this release are:

Pete Noone is a principal at Solomon Cordwell Buenz (SCB), an architecture, interior design and planning firm with a thoughtful design vision and a dynamic national imprint. As the managing director of SCB’s San Francisco office, Noone provides leadership to the firm’s West Coast practice, which includes numerous high-rise residential, office, and mixed-use developments, as well as student life and residential facilities on several California college and university campuses.